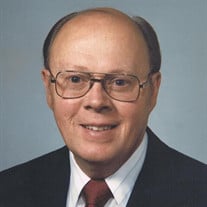 Gerald W. Allen Jr. of Ainsworth, NE passed away on Wednesday, January 19, 2022, at the Brown County Hospital in Ainsworth at the age of 90. Jerry was born in York, NE, on December 2, 1931, the eldest of four children to Gerald and Louise (Terry) Allen. He attended Creighton Public Schools and graduated with the class of 1950. One special accomplishment during his high school career was earning the Eagle Scout rank. While a senior in high school, Jerry set the school record for the 880-yard run in track-a record that he held for 25 years. He also won the gold medal at the State Track Meet in 1950. After high school, Jerry attended Doane College for two years before he enlisted and served in the United States Army from 1954 to 1956. He was stationed in Nuremberg, Germany and enjoyed traveling while on leave. After his service, Jerry attended the University of Denver where he graduated with a Bachelor of Science degree in business administration. On September 25, 1960, Jerry was united in marriage to Mary Ann Rehm in Creighton, NE. The couple was blessed with three children, Sarah, Jerry, and Margaret. The family made their home in Ainsworth and became active in the community in a variety of capacities. Jerry worked for Cliff and Idle Dixon at the Gambles store from 1959 until 1963 when he and Mary Ann purchased the business. Jerry and Mary Ann owned and operated the business as Gambles and later, Hardware Hank with the help of several dedicated employees until 1993 when they retired to enjoy more time with family and friends. Jerry was an active and longtime member of a number of local and national organizations, including the Ainsworth Chamber of Commerce, Master Masons and Lions Club as a 65-year member, Sandhills Shrine Club, American Legion, B.P.O. Elks Club #1790, and the United Methodist Church where he served on a variety of boards. Additionally, he was a member and Past Worthy Patron of the Bethany Chapter of the Order of the Eastern Star. He also served as a board member for the airport authority, city library, Cottonwood Villa and others. Jerry was an avid coin and stamp collector and had a wealth of knowledge that he was happy to share with anyone who would listen. He also enjoyed collecting model trains. Over the years, Jerry enjoyed traveling to trade shows and other destinations with his beloved family. As a businessman, Jerry was always happy to share a conversation and was willing to make sure people had what they needed, even when their resources were limited. He was a great salesman, who some would say could have “Sold an ice cube to an Eskimo.” Jerry was a person who never knew a stranger, no matter where he went. His advice about business and life decisions touched many lives through the years. Proud to be a Shriner, he and Mary Ann were honored to make many trips to the Shriners Hospital in Minneapolis with children who needed special medical attention. Jerry was preceded in death by his parents; his father-in-law and mother-in-law, Fritz and Margaret (Meyer) Rehm; siblings Paul (Pede) Allen, Ann Hutchson and husband Richard (Dick), Jane Holoch, and her daughter Carrie; sister-in-law Florence Schnauber and husband Louis, sister-in-law Lela Strope and husband Bernard along with numerous aunts, uncles, and cousins. He leaves to mourn his wife, Mary Ann of Ainsworth; daughter Sarah Hnatov and husband Matt of Potomac, MD, son Jerry and wife Patti of Omaha, NE, and daughter Margaret McInturf and husband Neal of Beaver City, NE. Jerry also is survived by his grandchildren Katie Allen, Clara Hermann and husband Kasey, Philip McInturf and wife Alli, Laura McInturf and significant other Isaac Watson, Christiana Hnatov, Anna Allen, Joseph Hnatov; and great grandsons Jax Hermann and Kasen McInturf along with a host of nieces, nephews, cousins, and friends. Funeral Services were held on Tuesday, January 25, 2022 at the United Methodist Church in Ainsworth, Nebraska with Pastor Martin Leeper officiated the service. The music was provided by Sherry Campbell. The congregational Hymns of “Blessed Be The Tie That Binds’, “Nearer My God To Thee” and “God Be With You Till We Meet Again” were sung. The Obituary was read by Neal McInturf. Personal remarks were given by Laura McInturf, Terry Schnauber, Charlie Kyser, Charlotte Wales and Jerry Ehlers. Organizational Rites were conducted by the Silver Cord Lodge #224 AF & AM and the Ainsworth American Legion Post #79. A Private Family Inurnment will be held at a later date in the Greenwood Cemetery in Creighton, Nebraska. Pall Bearers were: Terry Schnauber, Boyd Strope, Lee Hutchson, Jon Hutchson, Ryan Holoch, Philip McInturf, Joseph Hnatov and Bryan Murphy. Honorary Pall Bearers were: All of Jerry’s Granddaughters, Great-Grandsons, Nieces and Nephews. Memorials were suggested to the family in Jerry’s name for future designation.

Gerald W. Allen Jr. of Ainsworth, NE passed away on Wednesday, January 19, 2022, at the Brown County Hospital in Ainsworth at the age of 90. Jerry was born in York, NE, on December 2, 1931, the eldest of four children to Gerald and Louise (Terry)... View Obituary & Service Information

The family of Gerald W. "Jerry" Allen Jr. created this Life Tributes page to make it easy to share your memories.