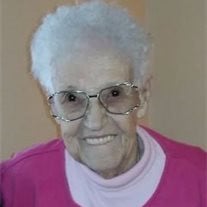 Georgia Faye Baldwin was born in Ainsworth, Nebraska on May 15, 1918, the only child of John Joseph and Elsie Fern (Offil) Baldwin. She passed away on July 21, 2016 at Parkside Manor in Stuart, Nebraska. As a girl, Georgia loved animals. Instead of playing with dolls, climbed trees with her boy cousins, and learned to fix "almost anything." She learned to play the piano and developed her voice, often singing solos at her church. Her mother taught her to sew, and she ultimately became an "excellent seamstress." After graduating from Ainsworth High School in 1936, she attended Midland College in Fremont, Nebraska where she sang in the A Cappella Choir. She completed a business course in 1937, returned to Ainsworth, and worked as an assistant to Henry Miles in the FSA office. In 1938, she married Henry "Hienie" R. Miller, originally from Calmer, Iowa. Hienie had been living in Ainsworth and working as a bookkeeper and manager for House Chevrolet for several years. The couple had three children, James Bruce (born in 1939), David Lee (born in 1941) and Sandra Diane (born in 1943). In 1952, Hienie resigned his position and purchased Big Deep Lake Lodge, a summer resort near Hackensack, Minnesota. The family managed the property in the summers and returned to Ainsworth during the off-seasons. The couple started an accounting business in Ainsworth. On Thanksgiving Day, 1959, Hienie passed away suddenly. Once Sandy finished high school, and with two sons in college, Georgia sold the resort and relocated to Lincoln, Nebraska. There, she earned her cosmetology instructor's license at the Ben Myers School of Beauty and taught there for several years. Georgia was introduced to John Stahn by a friend and they married in 1969. The couple moved to Fairfield Bay, Arkansas where they lived for eleven years. In 1980, they moved to Sun Lakes, Arizona. In 1985 they divorced. Georgia remained in Arizona until 1999 when she moved back to Ainsworth. Georgia was always an avid reader and in later years, when her eyesight began to fail, she switched to audio books. She was a longtime member of Eastern Star serving in several capacities. She also volunteered for years at the Ainsworth Thrift Shop whose funds benefited the local hospital. Georgia was preceded in death by her parents, her husband, Hienie, and her great-grandson, Gunnar Miller. Those left to mourn her passing are her sons, Jim(Nancy) Miller, Torrington, Wyoming, Dave(Thelma)Miller, Omaha, Nebraska, daughter, Sandy(Larry) Schelm, Ainsworth, and Carole Miller, Torrington, Wyoming; seven grandchildren and spouses and 12 great-grandchildren. In lieu of flowers, memorials may be made in memory of Georgia Miller to the Brown County Endowment Fund, P0 Box 323, Ainsworth, Nebraska or Order of Eastern Star Bethany Chapter #113, 429 North Walnut, Ainsworth, NE. Memorial Services were held at the Hoch Funeral Home in Ainsworth, with Pastor Georg Williams officiating the service. Music was provided by Betty Bower. "Amazing Grace" was the congregational selection provided. Services were offered by the Order of Eastern Star Bethany Chapter #113. Inurnment followed at the Ainsworth Cemetery.

Georgia Faye Baldwin was born in Ainsworth, Nebraska on May 15, 1918, the only child of John Joseph and Elsie Fern (Offil) Baldwin. She passed away on July 21, 2016 at Parkside Manor in Stuart, Nebraska. As a girl, Georgia loved animals. Instead... View Obituary & Service Information

The family of Mrs. Georgia Faye (Baldwin) Miller created this Life Tributes page to make it easy to share your memories.

Georgia Faye Baldwin was born in Ainsworth, Nebraska on May 15,...