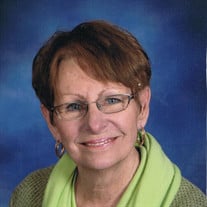 On June 2nd, 1942, Georgean Gappa was born to Edwin Gappa and Lucille Georgean Dymek Gappa in the big city of Chicago, Illinois. She wasn’t a city girl for long as within the year of her birth, she moved with her parents to the country near Ashton, Nebraska. She was the oldest of five siblings: two brothers, Norman and Richard Gappa and two sisters, Diane (Chelewski) and Donna (Fells). Jean was a strong force working hard on her father's dairy farm hauling buckets and milking cows. Even though her father didn’t think it was necessary for a woman to go to high school, she insisted. After she graduated from Ashton High School in 1960, she moved back to the city working at Mutual of Omaha in Omaha, Nebraska. It was around this time at the age of 19 Jean caught the eye of Raymond James Stenka. According to Ray, Jean played hard to get. The love story was a success as they were wed on October 5, 1963 at Our Lady of Mt. Carmel in Paplin, Nebraska. They lived in Loup City, Nebraska for six years before Ray’s employment moved them to Ainsworth, Nebraska. To this union, five sons and two daughters were born. It goes without saying what occupied Jean’s time with a tribe of this size, and if you met this tribe, you know they were a handful. She was an amazing cook, her pies were her specialty. Insistent on feeding anyone that showed up at her home, she would persist until you were bellied up to the table with something delicious she had prepared. She was a meticulous gardener; she could and would nurture anything that resembled a plant. Her beautiful landscape was a testimony to this passion. She could also be accused of being an over-enthusiastic Husker Fan. She loved her “some football!” Much of her time was spent serving at the St. Pius X Catholic Church. She also helped with the Ainsworth Thrift Store, but she often joked that she bought and brought more stuff home than she sold. Jean passed away at Bryan LGH East Hospital in Lincoln, Nebraska the morning of November 5, 2018 whereupon she was reunited with her husband Ray, daughter Rae Jean, parents, Edwin and Lucille, brother, Norman and many other loved ones whom preceded her. Surviving include children; Kelly Stenka of Valentine, Nebraska, Kurt Stenka of Gillette, Wyoming, Kenneth Stenka and wife Kimberly of Stuart, Nebraska, Scott Stenka and wife Cathy of Lincoln, Sheri and husband Luca Papini of Sioux Falls, South Dakota, and Mark Stenka and wife Stacy of Lincoln. Also surviving are 18 grandchildren and 10 great-grandchildren.One brother Rich Gappa and wife Donna of Grand Island, Nebraska; two sisters Diane and husband Mike Chelewski of Arcadia, Nebraska, and Donna and Dennis Fells of Mulvane, Kansas; along with nieces, nephews, and other family members. A Rosary Prayer service was held on November 8, 2018 at Hoch Funeral Home of Ainsworth. Funeral services were held on November 9, 2018 at the St. Pius X Catholic Church in Ainsworth, Nebraska with Father Phil Flott serving as Celebrant. Music was provided by DeAnn Morse. Music Selections of “Be Not Afraid,” “One Bread, One Body,” “You Are Mine,” and “Amazing Grace” were provided. The obituary was read by Kim Stenka. Pallbearers were Michael Stenka, Jake Stenka, Theo Stenka, Josh Stenka , Mar Lee Stenka and Nate O’Keefe. Honorary bearers were all of Jean’s other family and friends. Burial followed at the Ainsworth Cemetery. Memorials were suggested to the St. Pius X Catholic Church or to Mother Teresa’s Missionaries of Charity. Hoch Funeral Home of Ainsworth was in charge of the arrangements.

On June 2nd, 1942, Georgean Gappa was born to Edwin Gappa and Lucille Georgean Dymek Gappa in the big city of Chicago, Illinois. She wasn&#8217;t a city girl for long as within the year of her birth, she moved with her parents to the country... View Obituary & Service Information

The family of Mrs. Georgean "Jean" Stenka created this Life Tributes page to make it easy to share your memories.