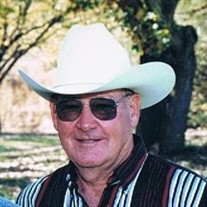 George A. Kicken was born May 26, 1938 to Raymond and Margaret (Klein) Kicken. George passed away on November 27, 2020 at the CHI Health-Good Samaritan in Kearney, Nebraska. He was raised on a ranch north of Ellsworth, Nebraska. George graduated from Alliance High School in 1956. In 1961 he was drafted in the U.S. Army. He was stationed at Ft. Lewis Washington. While there, George and Delores (Poole) were married. Son, Todd was born while there. He was discharged in 1963 and they moved to the family ranch in Ellsworth. Daughter, Dawn was born in 1965. In 1969 the family moved to the ranch at Ainsworth, Nebraska. Because of bad winters, they moved to town. George went to work for K-N Energy and they built their home. He worked for 22 years for K-N Energy when he retired and bought the ranch south of Ainsworth and went into partnership with son Todd. He loved ranch life. He looked forward to branding so he could visit with fellow ranchers and talk about his Irish Black Cattle, even if they have Angus. Family meant a lot to him. On school breaks he would go get the grandkids to bring to the ranch. When grandson, Jacob was four he taught him his numbers by reading the numbers on the cow ear tags. He taught granddaughter Kirstie how to rake hay. He was their PaPa. He was a member of the Elks Club and the Sandhills Cattle Association. George is preceded in death by his parents; brother, Ray Kicken; and sister, Beverly Jensen. He is survived by his wife, Delores of Ainsworth, NE; his son, Todd Kicken of Ainsworth, NE; Daughter, Dawn (Tony) Paulsen of Papillion, NE; 2 grandchildren; brother, Lucien (Margaret) Kicken of Scottsbluff, NE; sister, Carol Wears of Lincoln, NE; sisters-in-law, Enid Kicken of Shelton, NE, Louise Poole and Sharon Andresen both of Minnesota; brother-n-law, Curt Poole of Minnesota; nieces, nephews and other family members. Graveside Memorial Services will be held at a later date. Memorials are suggested to the Brown County Hospital, the Brown County Ambulance and the Raven Fire Department. Hoch Funeral Home of Ainsworth is assisting the family with arrangements.

George A. Kicken was born May 26, 1938 to Raymond and Margaret (Klein) Kicken. George passed away on November 27, 2020 at the CHI Health-Good Samaritan in Kearney, Nebraska. He was raised on a ranch north of Ellsworth, Nebraska. George graduated... View Obituary & Service Information

The family of George A. Kicken created this Life Tributes page to make it easy to share your memories.