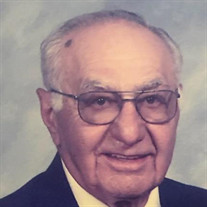 Longtime Ainsworth, NE resident George Kamas died at the Sandhills Care Center in Ainsworth on April 15, 2022 at the age of 95 years. Those familiar with his 64 years in Ainsworth knew him as a businessman devoted to his family, a golfer who enjoyed the camaraderie as much as the game and a quick wit with a clever quip and a louder laugh. But many people did not know that he had a young life in agriculture, military service, and the experience as the first generation of immigrants that defined so many of his “Greatest Generation.” George was born on February 2, 1927, in Garden City, MN. He was the eighth of 12 children born to Joseph and Peggy (Hadde) Kamas, Lebanese immigrants who came to the US and married in 1913. His early life on the farm involved both labor and business as his parents spoke limited English and relied on the children for many dealings. He excelled in high school mathematics and played halfback for the football team. Upon graduation in 1945, he enlisted in the Navy and served as a Physician Assistant before being discharged in 1946 and recalled again in 1951-52 during the Korean Conflict. He carried this distinction through his life and at death was one of the last surviving World War II veterans in Brown County. In between tours, he farmed and attended Mankato State College. Following the service, he returned to Minnesota and began what would become his real career in retail, first starting a farm equipment business with his brothers. During this time, he met Ainsworth native Ramona Abraham at a pea vinery in Le Sueur, MN while she was there visiting family. They married in 1958 and moved to Ramona’s home town of Ainsworth. He resumed his love for business, first in Stec’s Toggery, run by his sister-in-law and her husband, Joe and Delores Stec. He and Ramona opened Kamas Shoes in 1962, which they operated until sale and retirement in 1989. The store was his foundation as a dedicated business and civic leader. He served on the Chamber of Commerce and acted as a vigorous promoter of retail events such as Krazy Daze. He was also active in the St. Pius X Parish, the local VFW and American Legion, along with be a member of Ainsworth Elks Lodge #1790 where he was especially proud to serve as Exalted Ruler during their Centennial year in 1968. George also enjoyed sports and had a passion for golf, playing on both the local course (where he had the distinction of making two holes-in-one) and many Nebraska Senior events. When he was not playing golf in the summer, he was likely tending to his vegetable garden. He also enjoyed playing bridge and cribbage and perhaps even more, the coffee, conversation, laughter, and stories that accompanied them. As much as George loved business and his community, he loved his family. He and Ramona had two sons, Jim and Daniel, and a daughter, Margaret Ann who preceded her parents in death in 1962. George delighted as his family expanded with Jim’s marriage to Donna and the three grandchildren that followed, Lauren, Alec and Claire. He also enjoyed a “second family” with Joe and Delores Stec and their three sons, Paul, John and Steve and their families. In addition to his daughter, George was preceded in death by his wife Ramona in 2007 and all eleven of his brothers and sisters: Julia, Adele, Mike, Dorothy, Ed, Lucille, Louis, Helen, Gene, Darlyne and Jerome. He is survived by sons Daniel of New York City, NY and Jim and his wife Donna of Louisville, KY and grandchildren Lauren and her husband Michael Gorrell, Alec and Claire, a sister-in-law Delores Stec of Grand Island, NE who recently passed away on April 24, 2022; nephews Paul (Deb) Stec of Kearney, NE, John Stec of Ainsworth and Steve (Beckie) Stec of Grand Island and their families along with 17 nieces and nephews from his many siblings. Funeral Service was held Thursday, April 28, 2022 in the St. Pius X Catholic Church with Father Mike Wetovick as Celebrant. Music was provided by DeAnn Morse with the congregation singing “On Eagle’s Wings,” “Prayer of St. Francis,” “I Am The Bread Of Life” and “How Great Thou Art.” Casket Bearers were: Alec Kamas, CJ Stec, Steve Salzman, Craig Haake, Bob Beatty and David Theis. Memorials were suggested to the family to be used for Alzheimer’s Research and Community Organizations to be designated. Interment was in the Ainsworth Cemetery with Military Honors conducted by Ainsworth American Legion Post #79. Hoch Funeral Home of Ainsworth was entrusted with the arrangements.

Longtime Ainsworth, NE resident George Kamas died at the Sandhills Care Center in Ainsworth on April 15, 2022 at the age of 95 years. Those familiar with his 64 years in Ainsworth knew him as a businessman devoted to his family, a golfer who... View Obituary & Service Information

The family of George Kamas created this Life Tributes page to make it easy to share your memories.