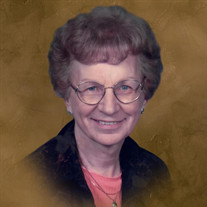 Geneva Madeline Kirk Davis was born April 16, 1925 in Mullen NE and graduated to her eternal home on June 9, 2021. She was the daughter of Estes and Grace (Palmer) Kirk and sister to Kenneth Kirk. The family moved near Vetal, SD when Geneva... View Obituary & Service Information

The family of Geneva M. (Kirk) Davis created this Life Tributes page to make it easy to share your memories.