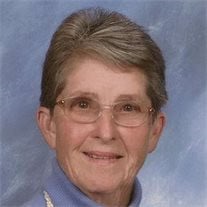 Geneva (Boyd) Minnig, the youngest of four children, was born October 23, 1930 in Chadron, Nebraska, to Elmer and Fern (Gill) Boyd. She died on August 20, 2014 at Parkview Manor in Stuart, Nebraska. Her father worked on the Chicago & Northwestern Railroad and her early childhood was spent in Chadron, where her family lived in a railroad boxcar. The family moved to several towns in western Nebraska until finally settling in Long Pine where Neva graduated from high school and subsequently met her future husband, Kenneth Minnig. Ken and Neva were married in 1948 and lived in Bassett for the next 66 years. They were members of the Bassett and Ainsworth Methodist churches. Neva loved music, especially Big Band recordings, that reminded her of the many Hidden Paradise and other dances they attended during their courtship and early years of marriage. She also sang with the Bassett Methodist Church choir for more than 30 years. She helped Ken in the garden and canned/froze vegetables each summer to support them for the next year. They were members of the Sandhills Swingers square dance club and traveled to many towns in Nebraska to support other clubs and to San Antonio, Texas, to attend the National Square Dance Convention. Neva enjoyed traveling and visited Canada, Connecticut, South Carolina, Florida, Texas, Virginia, Hawaii, and Alaska. She collected bells from everywhere she traveled, amassing a collection of over 100 of the little ding-a-lings. She operated The Yarn Shop in Bassett selling high grade yarn and accessories for crocheting and knitting. In addition to the supplies, there were plenty of "yarns" to be told. Following Ken's retirement they enjoyed in living during the summers in their cabin on Pine Creek. Neva was preceded in death by her parents; daughter, Debra; brothers, Carmen and Cecil Ray Boyd; sister, Nadine Fletcher Rolf; and in-laws, George and Neva Minnig, Eldon Minnig and Bertha Minnig Brown, Kenneth and Lorene Bentley. Dale and R'Lene Minnig and Evelyn Minnig, The last of her generation from the Boyd family, Neva is survived by her husband, Kenneth; sons, Doug (Patricia) of Bulverde, Texas, and Jeffrey (Penny) of Flower Mound, Texas; four grandchildren; one great-grand son; and many nieces and nephews. Funeral services were held on August 29, 2014 at the United Methodist Church in Bassett, Nebraska with Pastor Rod Heildbrun and Pastor Eldon Davis officiating over the service. Special music was provided by Kristie Sybrant-Keller and Judith Sybrant-Lemp, with song selections of "Heaven" and "The Old Rugged Cross Medley". Pallbearers were, Raymond Terry, Terry Fletcher, Mark Bentley, George Fletcher, Nathan Minnig and Jon Minnig. Honorary bearers were, all of the Bassett and Ainsworth United Church families. Burial was held at the Bassett Memorial Park Cemetery under the direction of Hoch Funeral Home of Bassett. Memorials were directed to the Rock County Hospital or to the Area Special Olympics Program in her name.

Geneva (Boyd) Minnig, the youngest of four children, was born October 23, 1930 in Chadron, Nebraska, to Elmer and Fern (Gill) Boyd. She died on August 20, 2014 at Parkview Manor in Stuart, Nebraska. Her father worked on the Chicago & Northwestern... View Obituary & Service Information

The family of Mrs. Geneva M. (Boyd) "Neva" Minnig created this Life Tributes page to make it easy to share your memories.

Geneva (Boyd) Minnig, the youngest of four children, was born...