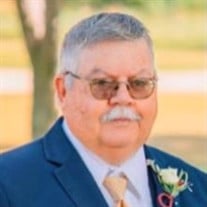 Gary Wayne Kinzie was born December 1, 1946, in the Lynch Community Hospital, the first of four sons born to Wayne and Vivian (Fernau) Kinzie. He was joined at home by brothers Terry in 1948, Randy in 1949 and Craig in 1964. Gary was responsible for naming his youngest brother instead of Vivian’s preference of Joel. Gary graduated from Butte High School in 1965, playing football, basketball and running track, but his favorite was always baseball, where he pitched and played second base. He passed on his love of baseball to his sons. Gary graduated from Wayne State College in 1969 with a bachelor's degree in education. He taught one year of social studies and coached junior high sports in 1969-70 in South Dakota before serving in the National Guard, completing basic training at Fort Jackson, South Carolina. Gary moved to Ainsworth in December 1970 and began a career with the Nebraska Department of Health and Human Services, where he served in adult services and later in child protective services. He married Coralene Lewis in 1972. The couple made their home first in Long Pine, and then in Ainsworth. They had two sons, Graig born in 1979 and Kyle in 1985. Gary retired in 1999 after 28 years with DHHS. He worked for the 2000 Census, and then worked part time for 12 years with the Nebraska Public Power District before retiring for good in 2011. Gary enjoyed bowling, golfing, gardening, hunting and picking wild asparagus, but his true passion was fishing, first with his parents and brothers, then with his children and his grandchildren. He was at his most content with a line in the water at the Spencer Dam, where he caught catfish from the age of 10 until the dam washed out in 2019. Gary spent almost every day for the past two years “helping” Coralene with granddaughter Vivian’s daycare, and relishing any chance to fish with his sons and Jaxon. Gary was an avid coin collector, starting when he was in eighth grade. He enjoyed going to auctions with Coralene, especially if he might have a chance of finding a needed coin for his collection. Gary was always up for a good game of Pinochle, and would tell his partners how they should have played. Heated conversations could be heard many days in the Kinzie household with three generations arguing over who played the hand wrong. Gary spent 50 years as a member of the Ainsworth Lions Club, joining in 1971, and could always be found in the kitchen during alumni banquets and at the Brown County Fair. Gary died suddenly Wednesday, March 31, 2021 at the Brown County Hospital at the age of 74, with Coralene, Graig and Kyle with him. He is survived by his spouse Coralene Kinzie of Ainsworth: sons Graig Kinzie and wife Stephanie of Ainsworth, and Kyle Kinzie of Ainsworth; two grandchildren; brothers Terry Kinzie of Plains, Montana, and Craig Kinzie and wife Janet of Urbandale, Iowa; sisters-in-law Sherrill Kinzie of Homer, Nebraska, Sandy Lewis of Adams, Nebraska and Ruth Lewis of Edina, Minnesota; and nieces, nephews and other family members. He was preceded in death by his parents, brother Randy Kinzie, brothers-in-law Bill Lewis and Jim Lewis, and sister-in-law Carol Kinzie. A Memorial Service was held on Saturday, April 10, 2021 at the Hoch Funeral Home in Ainsworth with Pastor Mick Thornton officiating at the service. The CD Selections of ‘The Wind” by Cat Stevens and “Hallelujah” by Rufus Wainright were played. Honorary Urn Bearers were members of the Ainsworth Lions Club. Inurnment followed in the Butte Cemetery at Butte, Nebraska with Scott Kinzie officiating. In lieu of flowers, memorials were to be made to the Ainsworth Lions Club in Gary's memory.

Gary Wayne Kinzie was born December 1, 1946, in the Lynch Community Hospital, the first of four sons born to Wayne and Vivian (Fernau) Kinzie. He was joined at home by brothers Terry in 1948, Randy in 1949 and Craig in 1964. Gary was responsible... View Obituary & Service Information

The family of Gary W. Kinzie created this Life Tributes page to make it easy to share your memories.

Gary Wayne Kinzie was born December 1, 1946, in the Lynch Community...