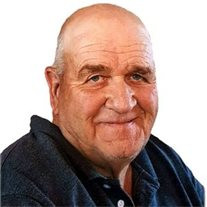 Gary Marvin Kelly was born in Ainsworth, Nebraska on September 19, 1946 to Grace N. (Gipson) and Marvin H. Kelly. He was the oldest of three siblings, Craig was born on October 1, 1949 (middle), and Christine "Chris" was born on June 12, 1955 (the youngest). He grew up outside of Ainsworth during his younger years. He enjoyed "sicking" the family dogs to chase the cows, regardless of getting into trouble. Dad and Craig could never leave Chris alone because she would cry until the parents came home. Chris "was the spoiled one." Dad and his sibling enjoyed playing Monopoly, Canasta, Basketball and Badminton in the backyard. Playing games "was the thing to do." They also enjoyed the neighborhood baseball "get-togethers," enjoyed playing Spoons, (where Craig would "fly" across the table to grab a spoon to beat Gary.) When Gary graduated from Ainsworth High School in 1964, he attended Wayne State College studying Business. He absolutely loved numbers and figuring out the accounting side of everything. During his first year, he got home sick and decided to return home. His dad Marvin passed away in August of 1977 and Grace in 2001, giving him the job of taking over the family farm. He shared his wonderful, kind, and loving heart with the farming community. He grew to love farming and enjoyed the outdoors immensely. Gary thoroughly loved planting and picking the corn each and every season. He of course loved updating his combine to newer and better technology to where the tractor/planter drove and planted itself. He could just sit back, relax and enjoy the ride! A couple years into his farming business, he was able to marry the love of his life, Virginia "Ginger" Denny, only taking a few years to completely woo her into going out on a date with him. They had many fun and interesting dates to where he finally asked her daddy Cecil for her hand in marriage. They were married on April 20, 1968 in Long Pine, Nebraska with a beautiful wedding in front of friends and family. Their love would forever be the path to their marriage, bringing three beautiful children into the world. On February 6, 1969, Michael Gary was born, who would later join him in taking care of the family farm. He would be the start of their life with kids and enjoying lots of Nebraska Cornhusker football games. Fifteen years later, Mom's dream of twins finally came true, "the only one in her family" as they would joke. Laura Naomi and Theresa Cecilia were born on July 31, 1984, preemies, 2-½ months early. Mom and Dad were ecstatic. Life was forever perfect and they continued to enjoy farming and ranching together with their three kids just northwest of Ainsworth. Gary enjoyed his cows, farming, watching Saturday Nebraska football games and Sunday Nascar racing. Football and Nascar racing were something that Dad truly loved and enjoyed relaxing from the crazy seasons of planting, harvesting, and calving cows. He was involved in various activities, including the Ainsworth Elks Lodge #1790. Dad also was able to have two wonderful animals join his lap every night, Sally (black dog), who passed away a few years ago, Pepper, (the cat) and his new animal dog companion, Jake. Jake and Pepper had his forever heart. They each shared spots on his lap as often as they could. Dad loved spending time with family especially on his birthday and Father's Days getting to eat the delicious sour cream chocolate cake topped with Mom's secret brown sugar frosting, ice cream and chocolate syrup. Dad loved his family. Just three years before his passing, he met another wonderful lady whom he fell in love with, Annie Moeder from Hutchinson, Kansas. She moved to Ainsworth a year later, after dating, to spend their years together. She brought along her Corgi's to share their wonderful personalities, fun and love. Gary is preceded in death by his parents Grace and Marvin, grandparents, Laura and Jack, and loving wife Ginger. He is survived by his companion Annie Moeder of Ainsworth, son, Michael Kelly of Ainsworth, daughters, Laura Kelly of Denver, Colorado and Theresa Kelly and partner Shawn Wilson of Chadron, Nebraska. Brother, Craig Kelly and wife Karen of North Platte, Nebraska, sister, Chris Hallock and husband Steve of Springview, Nebraska; brother-in-law, Gerald Denny, wife Theresa, of Long Pine, sisters-in-law, Margie Cosgrove and husband Tom, of Long Pine, Judy Frew of Ainsworth, and Cathy Cole and husband Glen of Long Pine and all their families, along with lots and lots of WONDERFUL friends who touched his life in so many amazing ways. He will truly be missed forever. Funeral services were held on February 26, 2018 at the St. Pius X Catholic Church in Ainsworth, Nebraska. Father Phil Flott served as Celebrant. Music was provided by Georgia Williams and Jason Nelson. Special song selections were, "Daddy's Hands," "I Can Only Imagine," "Amazing Grace," "On Eagle's Wings," and "You Raise Me Up." Casket bearers were Bob Maxwell, Tod O'Hare, Doug O'Hare, Corby O'Hare, Pat Schumacher, Tonny Beck, Steve Dodds, Rick Irwin, Rick Scott, Dale Scott, and Tracy Hand. Honorary bearers were, Charles Hughes, Bill Micheel, Darrin Kremer, Dirk Mitchell, Brian Arens, Rob Strand, Don Anderson, Mike Davis, Phil Fuchs, Larry Schelm, Jeff Coulon, Tim Hand, Bob Wilson, Shawn Fernau, and all of Gary's other family and friends. Burial followed at the Ainsworth Cemetery under the direction of Hoch Funeral Home of Ainsworth. In lieu of flowers memorials have been suggested to the family in his name for a future designation.

Gary Marvin Kelly was born in Ainsworth, Nebraska on September 19, 1946 to Grace N. (Gipson) and Marvin H. Kelly. He was the oldest of three siblings, Craig was born on October 1, 1949 (middle), and Christine "Chris" was born on June 12, 1955... View Obituary & Service Information

The family of Mr. Gary M. Kelly created this Life Tributes page to make it easy to share your memories.

Gary Marvin Kelly was born in Ainsworth, Nebraska on September...