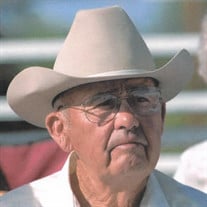 Buck was born to George and Josephine (Dillon) Carr on April 25, 1929 at home, rural Springview, Nebraska, the only son of seven children, three older sisters: Elayne, Ethelda and Pauline, and three younger sisters: Betty, Josephine and Daphyne. His mother named him Garth, but his Dad nicknamed him Buck, right after he was born after a western actor that was in a movie he liked. Buck attended school 1.5 miles west of their home, through the eighth grade. He then attended and graduated from Keya Paha County High School in Springview with the class of 1946. He was the first one of his family to finish high school. Buck was called to military duty on June 7, 1951 and was discharged on June 6, 1953. Most of his service time was spent in Alaska. After returning home, he worked with his dad on the Dr. Leo Beattie ranch northwest of Springview. On May 8, 1954 he was united in marriage to Doris M. Rasmussen, a longtime neighbor, at Norden, Nebraska. They would have been married 66 years had he lived until May 8th. They continued to live on the Beattie place and worked for Dr. Beattie, getting cattle for payment. Their first child was stillborn, a son, named Mark Dwaine. On March 14, 1956, Douglas Dwaine was born at the Ainsworth Hospital in Ainsworth, Nebraska. In November of 1957 they bought the Ernest Kienke ranch four miles north of Springview, and moved there in February of 1958, where they lived the rest of his life. On April 24, 1958, Rick Eugene was born at the Ainsworth Hospital. Life became very busy for the young family. Four years later on September 10, 1961 another son, David George was born at the Ainsworth Hospital. Only to be followed on January 11, 1962 by a sister, Kathleen Kaye (Kathy). All of the kids attended Liberty District 17 Grade School in rural Keya Paha County through the eighth grade and then graduated from Keya Paha County High School: Doug (1974), Rick (1976), David (1981) and Kathy (1982). Rick got married in 1980 and Kathy in 1982. On August 26, 1985 a terrible vehicle accident took the life of our darling Kathy at the age of 21. She left behind her husband Larry Day of Bartlett, Nebraska and an almost three-year-old daughter, Jennifer Mae. This was very devastating to our family. However life had to keep moving on. Over the years more acres of land were added and many more cows. Buck was awarded a membership in the Cowboy Hall of Fame in 2007. In 2015 another tragedy rocked our world when our precious son David passed away at home from a five-year fight with cancer at the age of 54. Buck was a very hard worker and he passed this trait on to his family. We raised Hereford cattle first, then changed to Angus later, milked cows for 31 years and raised hogs and chickens. He belonged to the Norden Roping Club for a few years, where he won a breast collar in calf roping. His main interests were his Angus cattle and his horse. He always kept and rode a good horse. He enjoyed helping the neighbors brand and appreciated their help in return. They really enjoyed going to square dances with the family put on by the Kenaston’s for many years. He dearly loved his wife and kids, grandkids, great-grandkids and especially loved the visits of the great-grandkids. This winter of 2019-20 has been very hard on Buck, getting weaker and frail, but still determined to feed his cows, including the day he entered the hospital. He entered the Long Term Care at Bassett, Nebraska on Valentine’s Day, February 14, 2020 and passed away there on Easter Sunday, April 12, 2020. He was the last living person in his family. He was preceded in death by his baby son, Mark; daughter, Kathy; son, David; his parents; his six sisters, Elayne Castello, Ethelda (Marvin) Blake, Pauline (Gail) Lehn, Betty Barngrover, Josephine (Harold) Prentice and Daphyne (Bill) Clark. Buck is survived by his wife Doris; sons, Doug and Rick Carr, all of Springview; grandchildren, Jennifer (Brooks) Smith, and Aimee (Lee) Schrader, both from Springview. Thad (Amanda) Carr of Scottsbluff, Nebraska; and great-grandchildren, Kaul Naughton, Kage Smith, Kait Smith, John Schrader, Kassie Schrader, Lexi Schrader, Tom Carr, Adam Carr and Nathan Carr, along with many nieces, nephews and other family members. A Graveside Service was held on Friday, April 17, 2020 at the Mt. Hope Cemetery in Springview with Pastor Jenice Epp officiating at the service. The song, “Wings Of A Dove” by Ernest Tubb was played. Casketbearers were: Rick Carr, Thad Carr, Lee Schrader, Brooks Smith, Matt Stephen and Jim Ruther. Military Honors were conducted by members of the Springview American Legion Post #98. Memorials have been suggested to the family in Buck’s name for a future designation. Hoch Funeral Home of Ainsworth was in charge of the arrangements.

Hoch Funeral Homes, Inc. will comply with the CDC and the State of Nebraska regarding Direct Health Measures pertaining to the Covid-19 situation. We

Buck was born to George and Josephine (Dillon) Carr on April...