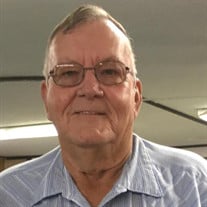 Garry Dean Vargason was born on May 16, 1947 to Orval and Ida (Sandall) Vargason at the Rock County Hospital in Bassett, Nebraska. Garry passed away November 8, 2021, in Lincoln, Nebraska at the age of 74 after struggling with multiple health conditions. He graduated from Rock County High School in 1966. He was drafted into the Army on October 26, 1966 and proudly served his country in Vietnam until September 1967. Garry was united in marriage to Rosemary Eileen King on June 18, 1972. One daughter, Amanda Kay, was born to them on March 19, 1980. Garry worked for Sanger’s Market for most of his working career. You could find him behind the meat counter ready to listen to a story or tell a joke. After retirement, he enjoyed ¬¬¬¬driving around town in his pickup. He loved horses, fishing and knew all the good ponds. It was no secret that if help was needed, he would be the first to arrive and the last to leave. Papa Garry loved spending time with his family and grandkids. Quentin and Jadyn were his pride and joy. He loved making it a top priority to attend their activities and spend time with them. He was able to spend his last five months living with them. Garry is preceded in death by his parents Orval and Ida Vargason; wife, Rosemary; brother-in-law, Dewey Polen; parents-in-law, Keith and Helen King; sister-in-law, Rhonda (Dale) Smith. He is survived by his beloved daughter Amanda (Jeremy) Fox; grandson, Quentin and granddaughter, Jadyn all of Lincoln, Nebraska; sister, Barbara Polen of Loup City; sisters-in-law, Ardith (Punk) Piihl of Lakeside, Nebraska and Marjorie (Rennie) Phillips of Missouri; brother-in-law, Milton (Marcy) King of Georgia; as well numerous nieces, nephews, cousins and friends. A Memorial Service was held on Saturday, November 20, 2021 at the St. Peter Lutheran Church in Bassett with Vicar Nancy Moore officiating at the service. The CD Selections of “Jealous Of The Angels” by Donna Taggart and “When I Get Where I’m Going” by Brad Paisley & Dolly Parton were played. The obituary was read by Evelyn Armstrong. Inurnment followed in Bassett Memorial Park Cemetery. Military honors were presented by the Bassett American Legion Post #123. Memorials were suggested to the family in Garry’s name for future designation. Hoch Funeral Home of Bassett was entrusted with the service arrangements. Online Condolences may be left for the family at www.hochfuneralhome.com.

Garry Dean Vargason was born on May 16, 1947 to Orval and Ida (Sandall) Vargason at the Rock County Hospital in Bassett, Nebraska. Garry passed away November 8, 2021, in Lincoln, Nebraska at the age of 74 after struggling with multiple health... View Obituary & Service Information

The family of Garry D Vargason created this Life Tributes page to make it easy to share your memories.