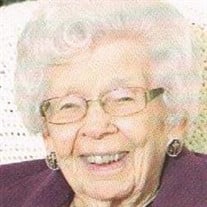 Garneta Jean (Seier) Johnson was born October 23, 1925 at the ranch 28 miles south of Long Pine, Nebraska to Henry and Bessie (Farris) Seier. She had a sister, Bernice who was two years older. A neighbor, Grandma Roggasch, was called on to help with the birth. She attended the Duff School for the elementary grades and graduated from Rock County High School at Bassett, Nebraska in 1943. She taught in rural school for three years. Garneta married Charles Jr. Johnson, most knew him by “Tuie,” on June 17, 1947. Garneta and Tuie lived on the Johnson homestead, contributed by the efforts of Mr. & Mrs. Charles R. Johnson who came to Rock County in 1908. They had three children, Richard, Jimm and Ken. In 1963, they bought the Trading Post Store at Rose, Nebraska and ran it for three years. From the Trading Post, they moved to Garneta’s parents’ ranch for two years and then back to the Homestead ranch. At this time, they had a Grade A dairy and also herd cows. In 1968, they sold the dairy cows due to Tuie’s first heart attack. They continued to ranch and be involved until 1975, when they turned it over to Jimm and Betty. Garneta continued to support her family and be involved with the Jolly Neighbors and the Taylor VFW. She really enjoyed watching her grandchildren’s school activities, and watching Nebraska Cornhusker football and volleyball games was the favorite past time. She was baptized and joined the St. Peter Lutheran Church in 2008. In July of 2008, she helped the ranch celebrate 100 years of existence. Garneta continued to live on the ranch until she moved to the Cottonwood Villa in Ainsworth, Nebraska in March 2017 and then she moved to Rock County Long Term in Bassett, Nebraska in December 2018. Garneta was preceded in death by her parents; her husband of 49 years, Tuie who passed away in March of 1996; her son, Ken who passed away in 2002; and her sister, Bernice; and brother-in-law, Edward Kuchera. She is survived by son, Richard of Jackson, Mississippi, son, Jimm (Betty) Johnson of Rose, and daughter in-law, Pam (Ken) Johnson of Ord. She is also survived by five grandchildren, Jake and wife, Erin Johnson of Rose, Carey and husband, Vic Nelson of Harlowton, Montana, Kelsie and husband, Joe Meier of Elm Creek, Nebraska; along with five great-grandchildren, Cody Nelson of Harlowton, Jade and Buck Johnson of Rose, and Jhett and Riley Meier of Elm Creek; along with nieces, nephews and other family and a host of friends. Funeral Services were held on Tuesday, January 7, 2020 at St. Peter Lutheran Church in Bassett with Vicar Nancy Moore officiating at the service. Interment was in the Duff Cemetery at Rose. Music was provided by Joe McBride providing the songs, “How Great thou Art” and “Ill Fly Away.” Casketbearers were: Carey Nelson, Cody Nelson, Jake Johnson, Jason Johnson, Joe Meier and Clay Kuchera. Honoray Bearers were: All of Garneta’s Other Family, Neighbors and Friends. Memorials were suggested to the Duff Cemetery or the Lutheran Church. Hoch Funeral Home of Bassett was in charge of arrangements and online condolences may by left at www.hochfuneralhome.com.

Garneta Jean (Seier) Johnson was born October 23, 1925 at the ranch 28 miles south of Long Pine, Nebraska to Henry and Bessie (Farris) Seier. She had a sister, Bernice who was two years older. A neighbor, Grandma Roggasch, was called on to... View Obituary & Service Information

The family of Garneta J. (Seier) Johnson created this Life Tributes page to make it easy to share your memories.