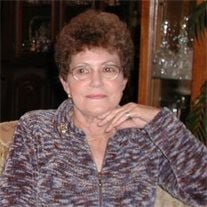 Frieda (Windorfer) Scholtes age 79, was born November 11, 1936 to Lorenz and Antonie (Rieger) Windorfer of Munich, Germany, and passed away on September 12, 2016. Frieda was united in marriage to Luke A. Scholtes January 29th, 1957. Frieda and Luke met while he was stationed in the military in Germany. The couple returned to Johnstown in August of 1957. Frieda became a naturalized citizen in 1963. Of this union, Frieda and Luke were blessed with three children; Charles E., James D., and Lori L. Frieda began her new life in the United States as a stay at home mother. The couple owned and operated a mechanic shop in Ainsworth for 36 years. Frieda had been employed at Peck's Café, The Ainsworth Bakery, the "Hen House" clothing store for 10 years and was manager of "Fritzi's" jewelry store in Ainsworth where she was widely known for helping husbands making their wives happy. Frieda was also a member of the VFW Auxiliary for 48 years. Frieda enjoyed her kids, grandkids, family and friends, her home, yard work and gardening. She loved cooking her special German food for all. She was a very giving person. She is preceded in death by her husband of 49 years, Luke A. Scholtes; her father and mother Lorenz and Antonie Windorfer; sister, Marilla Ecker, and brothers, Andy Windorfer and Christian Windorfer. Frieda is survived by sons, Charles E. (Julie) Scholtes of Lincoln and James D. (Susan) Scholtes of Ainsworth and daughter Lori L. (Chris) Onstad of Manhattan, Kansas; sisters, Katharina Berringer of Munich, Germany, Fini Sulzenbacher of Italy, Ingrid Schneider of Germany and nine grandchildren, eleven great grandchildren, sisters and brothers-in-laws, nieces, nephews, extended family and friends. She will be greatly missed and forever remembered. Memorial Services will be held on Saturday, October 1, 2016 at the Assembly of God Church in Ainsworth, Nebraska. Officiating over the service will be by Pastor Gary Graesser and Frank Williams Jr. Special CD selections will be "Amazing Grace" by Elvis Presley and "Orange Blossom Special" by Don Rich. Granddaughters, Courtney Scholtes and Kelsey Scholtes will be singing a special music selection entitled, "In The Arms of An Angel." Honorary bearers will be all of Freida's Grandchildren and Great-Grandchildren. Inurnment will follow at the Ainsworth Cemetery under the direction of Hoch Funeral Home. Hoch Funeral Home of Ainsworth was in charge of the arrangements.

The family of Mrs. Frieda "Fritzi" (Windorfer) Scholtes created this Life Tributes page to make it easy to share your memories.