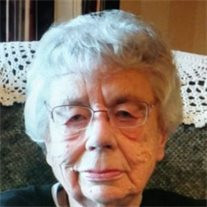 Freda Elizabeth Dutton was born at home in Murray, Iowa on October 11, 1922, to Joseph L. and Clara E. (Emm) Dutton. She had two older brothers, Clifford and Harold and a younger brother Harlan. She grew up near Springview, Nebraska and graduated from high school at Johnstown, Nebraska in 1941. Freda was united in marriage on May 22, 1943, to Frank T. Hinrichs. She passed away at her home in Ainsworth on December 3, 2017 at the age of 95. After high school Freda taught in rural schools for three years. She worked as a part-time librarian at the Johnstown High School, the Alder Public Library, and later at the Ainsworth Public Library for many years. She was an avid gardener of many varieties of vegetables and beautiful flowers. It was her personal challenge to enter her bountiful garden produce and flower arrangements at the Brown County Fair every year. She was an avid supporter of the fair and exhibited her prize-winning entries there until age 92. Freda enjoyed traveling on many tours throughout the years. The "Trip of Trips" as she called it was in 1983, when she and Frank went on a cruise to Greece and to the island of Cyprus to visit two of their grandchildren. Freda always liked to say that she "had the best grandchildren." She loved to play games, share books with them, and attend their activities. She enjoyed them all, wholeheartedly. Freda was an accomplished seamstress, a talent that she acquired from her mother. Freda spent endless hours nurturing her love of fabric with a sewing machine or a needle and thread, knitting, crocheting, tatting, and all types of fancy work. Her true passion was designing and making elaborate, colorful and intricate quilts. She shared her masterful creations with all of her children and grandchildren. Freda enjoyed life and people. She had an incredible knack for quick wit, and commonly topped-it off with her signature grin. It. was sure to brighten up her face and those around her. She was a member of the Order of Eastern Star, Women's Extension Clubs, United Methodist Women, and the United Methodist Church. Preceding her in death were her parents, an infant brother, her husband Frank in 1986, and her three brothers. Surviving her are children, Carol Scheim of Atlanta, Georgia, Craig Hinrichs and wife Ann of Oxford, Ohio, Curtis Hinrichs and wife Jenny of San Diego, California, Corvin Hinrichs and wife April of Ainsworth, and Catherine Hinrichs and husband Richard Masters of Ainsworth, as well as numerous grandchildren and great-grandchildren, nieces, nephews, and other family members. A celebration of life service was held on December 16, 2017 at the United Methodist Church in Ainsworth, Nebraska with Pastor David Randall officiating. Musical selections of "How Great Thou Art" and "In the Garden" were provided by Sherry Campbell. The CD selection of "I Can Only Imagine" was also provided. A Peom was read by Chris Hallock. Honorary bearers were all of Freda's grandchildren and great-children. Organizational Rites were conducted by the Bethany Chapter #113 Order of Eastern Star. Inurnment followed at the Ainsworth Cemetery. In lieu of flowers, memorials have been suggested to the Ainsworth Public Library, the United Methodist Church, or to the Sandhills Iron Horse Riders.

Freda Elizabeth Dutton was born at home in Murray, Iowa on October 11, 1922, to Joseph L. and Clara E. (Emm) Dutton. She had two older brothers, Clifford and Harold and a younger brother Harlan. She grew up near Springview, Nebraska and graduated... View Obituary & Service Information

The family of Mrs. Freda E. (Dutton) Hinrichs created this Life Tributes page to make it easy to share your memories.

Freda Elizabeth Dutton was born at home in Murray, Iowa on October...