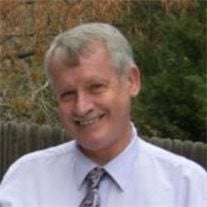 Fred P. Meyer was born to Leroy C. and Jennie W. (Bezanson) Meyer, on June 18, 1947, at Siloam Springs, Arkansas. He was followed by four brothers and one sister. Fred graduated from Ceres high school and then attended California Christian College as a layperson. He was active in his hometown church as a young man. He married and had two children. He became a reserve officer with the Ceres police department. He later attended the academy and became a full time officer for the Ceres police department. Fred came to Nebraska when he accepted the position of Chief of Police for the City of Bassett. After he left law enforcement, he held various positions. Fred later married Deborah J. Cammack on February 14, 1981 at Madison, Nebraska. They settled in the Denver, Colorado area for more than 15 years, where Fred was working primarily as a guard for a private security firm. They then moved to Long Pine in 2010. While in Long Pine, he was involved in the local city government. He enjoyed being with family and friends; cooking, traveling, and woodworking. Fred passed away on July 18, 2015 in the Brown County Hospital after spending a wonderful day with his family. He was preceded in death by his parents and two brothers. He is survived by his wife Deborah of Long Pine; son, Chris Meyer and wife Gigi of Warrenton Virginia; daughter, Jennifer Minnie and husband Gary of Twin Valley Minnesota; Mother-in-law, Alice Cammack of Long Pine; brother, Harold Meyer and wife Margie of Modesto California; sister, Sharon Vilmur and husband Joe of Groveland California; nine grandchildren and numerous nieces and nephews. A celebration of life service was held on July 27, 2015 at Hoch Funeral Home in Ainsworth, Nebraska, with Pastor Dan Carlson officiating the service. CD selections of "Go Rest High on That Mountain" by Vince Gill, "Heaven Got Another Angel" by Gordon True, "When I Get Where I Am Going" by Brad Paisley/Dolly Parton were provided. Special reflections were given by son Chris Meyer. Inurnment will be held at a later date. In lieu of flowers, memorials were suggested to the family for a future designation.

Fred P. Meyer was born to Leroy C. and Jennie W. (Bezanson) Meyer, on June 18, 1947, at Siloam Springs, Arkansas. He was followed by four brothers and one sister. Fred graduated from Ceres high school and then attended California Christian... View Obituary & Service Information

The family of Mr. Fred P. Meyer created this Life Tributes page to make it easy to share your memories.