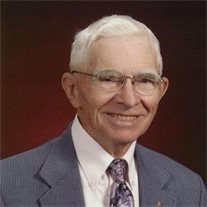 Franklin Dean Graff, age 93, passed away October 17, 2014 in the Good Samaritan Hospital in Kearney, Nebraska as the result of an automobile accident. He was born on June 1, 1921, at the ranch north of Johnstown, Nebraska to Arthur "Chuck" and Velma (Casselman) Graff. He spent his childhood on the ranch at Plum Creek, and graduated from Johnstown High School in 1939. After graduation, Dean went to California to work in a B29 airplane factory. In January of 1943, Dean joined the United States Navy and served as an airplane mechanic on escort carriers in the Pacific until January of 1946. He was honorably discharged as an Aviation Machinist's Mate E First Class. He then served in the Navy Reserve from 1947 to 1952. On March 16, 1947, Dean married Jacquelyn Petersen. They spent their first years of marriage in Omaha, where Dean was employed by the Veterans on the Job Employment Service. While in Omaha, Dean and Jackie welcomed their first child, Connie. In 1950, the three returned to Brown County and started farming. During this time they welcomed Kathy, Merrilee, and Marty. In the fall of 1960 they moved to the family farm. From 1964-1967 Dean and Jackie operated the Ainsworth Development Farm in cooperation with the Nebraska Advisory Committee on Irrigation Development. While working the farm Dean also worked as a census taker and Field Recorder for the ASCS. Dean became manager of the KBR Soil & Water Conservation District, the Brown County Weed District, and later, the Middle Niobrara Natural Resource District. As Manager of the Middle Niobrara NRD, he was project coordinator for the Cub Creek Project in Keya Paha County and the Sand Draw West project north of Johnstown. After retirement in 1986, Dean and Jackie traveled and did mission work in Texas and Louisiana. In 1995 he became employed as "Mr. Fix It" for the Maintenance Department of the Brown Co. Hospital until 2005. In 2001, Dean was honored to receive the Caring Kind Award from the Nebraska Association of Hospitals and Health Systems. He also received the Aksarben Good Neighbor Award and the Ainsworth Chamber Senior Citizen Award. In 2005 Dean and Jackie moved to their home in Ainsworth, Nebraska. Throughout his lifetime Dean remained very active. He enjoyed dancing, especially the polka. He loved a good game of cards. He and Jackie attended as many of the grandchildren's activities as possible. In his later years he enjoyed going to the Senior Citizen Center for meals and social events. Dean also loved tinkering with projects in his garage such as woodworking, small engines and home repairs. Dean felt giving to others was important. For his 90th birthday Dean requested canned goods in lieu of a card shower. The result was a donation of over 100lbs of food for the Brown County Food Pantry. Dean was a lifetime member of the Johnstown United Methodist Church where he was influential in modernizing and adding a basement to the church in 1956. He was a member of the Brown County Ag Society, where he was an officer for many years. Dean served on the Board of Directors of KBR Rural Electric Association for 30 years. He was a Past Master of Wood Lake Masonic Lodge #221, and a member of the Ainsworth American Legion Post #79, Elks Lodge #1790, Johnstown Fire Department, and Johnstown Alumni Association. Dean is survived by his wife Jackie of 67 years; four children, Connie Dillon and husband Brad of Ainsworth, Kathy Burchell and husband Bill of Ainsworth, Merrilee Spanel of Omaha, Nebraska, and Marty Graff and wife Brenda of Ainsworth. Grandchildren, Jim and Jennifer Rau, children: Jesse and Jade Deena and Ric Fritz, children: Dilan, Rachel, Bryson Fritz, Harley Svenson, Tom and Tammy Burchell, daughter: Maddy Kristy and Bub Killion, sons: Taylor and Pete, daughter: Morgan and AJ Stevens, and son Glen, (Dean's Great-Great-Grandson) Emily and Dean Johnson, daughter: Katrina Keogh Jodi Spanel, sons: Juston Spanel and Kamren Hamlin T.J. and Shannon Spanel, sons: Evan and Aidan Jamie Spanel Jake and Jeri Graff, daughters: Ava and Elsie Lucas Graff, Micah Graff,and Noah Graff. Sister, Glee Swanson; sister-in-law, Jeanne Graff; and a host of nieces, nephews and cousins. Memorial Services with Masonic Rites by the Wood Lake Masonic Lodge #221 and Military Honors by the Navy Funeral Honor Team and the Ainsworth American Legion Post #79 were held on October 24, 2014 at the United Methodist Church in Ainsworth. Pastor Eldon Davis officiated the service. Music was provided by Marilyn Williams, Bob and Duane Keim. Special song selections were, "We Are Going Down the Valley" and "It's Not the Last Mile." Congregational selection was "God Be With You Til We Meet Again." Honorary bearers were, James Rau, Rick Fritz, Tom Burchell, Bub Killon, Dean Johnson, TJ Spanel, Jamie Spanel, Jacob Graff, Lucas Graff, Micah Graff, and Noah Graff. A private family inurnment was held at the East Woodlawn Cemetery near Johnstown. In lieu of flowers, memorials were suggested to the Johnstown United Methodist Church, the Ainsworth Senior Center, Brown County Ag Society, East Woodlawn Cemetery or to the Brown County Hospital in Dean's name. Hoch Funeral Home was in charge of the arrangements.

Franklin Dean Graff, age 93, passed away October 17, 2014 in the Good Samaritan Hospital in Kearney, Nebraska as the result of an automobile accident. He was born on June 1, 1921, at the ranch north of Johnstown, Nebraska to Arthur "Chuck"... View Obituary & Service Information

The family of Mr. Franklin Dean "Dean" Graff created this Life Tributes page to make it easy to share your memories.