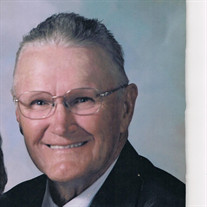 Frank McGuire was born on the family farm to William and Ruth (Hopkins) McGuire on December 8, 1926 and passed away on July 4, 2019 at the Rock County Hospital in Bassett at the age of 92. He had three older brothers – Thomas, Charles, William and one younger brother, Mick. When Frank was ten years old his father passed away with pneumonia. Frank learned to milk cows at a young age as the family depended on milk for food and money from the sale of cream to buy groceries. During the school year Frank would milk the cows early in the morning and then run to the water tank to clean his shoes before walking to school as he had only one pair of shoes. During the early teen years, he would earn money in the summer time by helping a neighbor. He would walk three-fourths of a mile to the neighbor’s then he would spend the rest of the day doing other work around the place. He would help milk the cows in the evening and then walk home. He was paid one dollar a day. When Frank finished grade school, World War II was in progress and his two older brothers went to the service. His next brother had polio when he was young, which left him handicapped. He did the work he was able to do with one hand. Therefore, going to high school was not an option for Frank as he had to earn money to put food on the table for his mother and two brothers. He stacked hay for people and picked up any odd jobs he could find. When he worked at the sale barn, he would ride a horse to town on Tuesday and ride it home on Thursday. The seats at the sale barn served as his bed. Frank got a full-time job working for I.W. Merritt on his ranch. He decided it was to time to get a partner, but it took him two years to catch Donna D. Diehl. They were married June 7, 1953. About a year later Uncle Sam called a recruit to go to Fort Leavenworth, Kansas for a physical. Frank said they patted him on his rear and it turned red so he was in the service. Frank left July 28, 1945 on the Chicago Northwestern for Fort Bliss, Texas where he had 12 weeks of Basic training. He was then sent to Schiller Park, Illinois. His stay there only lasted about six weeks when his orders came for the far east. He ended up in Korea for the next sixteen months. His forty-eighth Field Artillery was about two miles from the DMZ. His unit guarded the bridge over the river. Frank received his honorable discharge on July 24, 1956. Frank got a job working at the Farmers Union Coop for about eight years. In 1964, he started working for Bennett Brothers Construction and Ken Minnig. During this time, he built a home on the east edge of Bassett for Donna and him. In 1969, Frank received an Award of Merit from the Knights of AK-SAR-BEN for outstanding Firemanship. He spent 27 seven years on the Bassett Fire Department, six of those years as Fire Chief. He had a chance for a state job, but he did not have a high school diploma so he took classes and tests and received his GED in 1973 which was issued through the Rock County High School. Frank and Donna were travelers taking two cruises – one to the Caribbean Islands and one through the Panama Canal. They had been in all 50 states, Mexico, and all of the Canadian provinces except Newfoundland. Ten winters were spent in Arizona then 10 winters were spent in Texas and while traveling they made many new friends. Dancing along with playing cards with friends was also a very important past-time for the McGuire’s. Frank was a member of the IOOF Lodge for 60 plus years and a life member of Bassett Legion Post 123. Frank is survived by his wife Donna of 66 years and was preceded in death by his parents and brothers. Funeral Services were held on July 8, 2019 at the United Methodist Church in Bassett, Nebraska with Pastor Jenice Epp officiating at the service. Music was provided by JoAnn Swanson. Special CD selections of “Amazing Grace” by the Statler Brothers, “How Great Thou Art” by Connie Smith, and “On The Wings of A Dove” by Ferlin Husky. The obituary was read by Lucky Schneberger. Interment followed at the Bassett Memorial Park Cemetery in Bassett. Military Honors were provided by the Bassett American Legion Post #123. In lieu of flowers, memorials are suggested to the family for a future designation.

Frank McGuire was born on the family farm to William and Ruth (Hopkins) McGuire on December 8, 1926 and passed away on July 4, 2019 at the Rock County Hospital in Bassett at the age of 92. He had three older brothers &#8211; Thomas, Charles,... View Obituary & Service Information

The family of Mr. Frank McGuire created this Life Tributes page to make it easy to share your memories.

Frank McGuire was born on the family farm to William and Ruth...