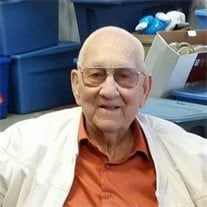 Frank E. Weander Jr. passed away March 3, 2017 at the Sandhills Care Center in Ainsworth, Nebraska at the age of 92. "Junior" was born at Bassett, Nebraska on October 26, 1924 to Katherine (Krause) and Frank Weander. He and his ten other siblings grew up around the Long Pine area. He attended grade school for a short period of time, but soon left due to having to go to work to help the family. Junior married Dorothy Mae Freeman on August 6, 1945 at Valentine, Nebraska. In 1956, they became proud parents of a son, Stanley Eldon Weander making their world complete. They resided in Ainsworth until 2001, when they moved to Valentine, and later moving into Oakwood Assisted Living in Valentine in 2004. Junior owned many places of business in Long Pine, Ainsworth, and Valentine throughout his life, making a living to care for his family with the little education he had. He owned a training arena, rental properties, a car lot, a gas station, a beauty shop, a furniture store, which was later turned into the bowling alley. Along with these places of business he owned the Frontier Bar, the Sandhills Bar, the Golden Steer, and the Hidden Paradise with a restaurant, bar, and dance hall for several years. Junior was loved by all and was truly a "one of a kind" guy. He enjoyed talking to everyone he met, spending time with his family, and helping others. He was known for being a "wheeler-dealer". He lived life to the fullest and enjoyed every moment of life he was given. Junior is preceded in death by his parents, Frank and Katherine; his beloved wife Dorothy; his ten siblings, Elsie, Betty, Gladys, Neva, Margie, Vi, Helen, Florence, Art, and Lyle. Junior is survived by his son, Stan Weander of Ardmore, Oklahoma; grandchildren, Sheena Weander and fiancé Brent of North Platte, Nebraska, Lindsey (Weander) Smith and husband Grant of Wichita, Kansas, Bridget Weander, of Norfolk, Nebraska, Rachel Weander of Ardmore, Oklahoma, and Kelsei, Keanna, and Taylor Gross. Three great-granddaughters, McKenna, Elleigh, Langstynn, and one great-grandson, Hughson, along with many nieces, nephews, and cousins. Funeral Services were held on March 11, 2017 at the United Methodist Church in Ainsworth, Nebraska with Pastor David Randall and Pastor Scott McClellen officiating the service. Music was provided by Linn Baxter. Special music selections of "Someday We'll Look Back" were provided by Joe McBride and "It's Not The First Mile" by Bob and Duane Keim. A CD selection of "Frank Weander, Call Him Junior" was provided by Joe George, Rocky Payne and children. Casket bearers were, Tim Iverson, Danny Daniel, Mark Shaul, Jay Gunnick, Gary Baxter, Ken Smith, and John Gross. Honorary bearers were, all of Junior's other family and friends. Burial followed at the Ainsworth Cemetery. Memorials were suggested to the family for a future designation.

Frank E. Weander Jr. passed away March 3, 2017 at the Sandhills Care Center in Ainsworth, Nebraska at the age of 92. "Junior" was born at Bassett, Nebraska on October 26, 1924 to Katherine (Krause) and Frank Weander. He and his ten other siblings... View Obituary & Service Information

The family of Mr. Frank E. "Junior" Weander, Jr. created this Life Tributes page to make it easy to share your memories.