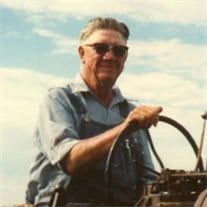 Francis Duffy was born near Long Pine, Nebraska, on November 30, 1913 to Elwood and Nora (Kernan) Duffy, both long time pioneers in Rock and Brown counties. He learned early the value of a hard day's work and worked with his parents to keep the ranch working and growing. He learned from his father the art of fine horsemanship and continued to provide top horses for the Ninth Cavalry near Fort Robinson. The final stallion that he managed was in his words "the finest horse he ever rode." He also worked to build the cattle herd that he had passed to his daughter and grandson. He was known in the community as a fine herdsman, and an excellent blacksmith. He was able to make whatever was needed with the materials that he had or could remodel. He proved this when he put mounted Kosch mowers on his old F-20 tractors after having been told that it could not be done. These tractors are still working in the hayfields today He was also a steward of the land and an advocate for wildlife, often leaving patches of hay unmowed so the grouse and quail had some habitat. He was married to Merle Frazier on November 28, 1938 at Long Pine. He supported her desire to be a teacher and each summer saw her off to summer school to help get her degree. One of his proudest moments was when he watched her walk across the stage at Chadron State College to get her Masters of Science degree in Elementary Education He continued to support her desire to teach, helping her get to school for the next 55 years during blizzards and other inclement weather. Francis or "Duffy", as he was known by his friends, was also an accomplished cat skinner. He used his beloved D-4 caterpillar to help local ranchers reclaim pastureland lost to blowouts and to build stock ponds and dams on Short Pine creek. He also used the Cat to help the county plow roads during the worst blizzards and dug out many of the neighbors hay for them. He was still using the Cat in 1996 to plow a path so that daughter Jo could get her calves to pasture across the road. Francis turned the ranch over to his daughter in his later years but continued to support and advise her in the running of the operation. He also was the main mechanic and fixer-upper, often complaining that Jo could break it faster than he could fix it". He will be missed. He is survived by daughter Jo, grandson Jason and wife Malissa, and four great grandchildren who were the light of his life. A Rosary Prayer Service was held on July 22, 2013 at the Holy Cross Catholic Church in Bassett, Nebraska with funeral services being held at the Holy Cross Catholic Church on July 23, 2013. Father Jim Heithoff served as Celebrant. Music was provided by Trudy Nolles. Special song selections provided were, "Be Not Afraid", "Christ Be Our Light" "How Beautiful", "Fly Like A Bird." Special CD selections provided were, "Daddy's Hands" and "He Walked on Water." Pallbearers were, Jason Stec, Jim Schoenberg, Keith Wright, Tom Cosgrove, Brian Donley, and Don Synovec. Interment was held at the Grandview Cemetery in Long Pine, under the direction of Hoch Funeral Homes of Ainsworth. Memorials were suggested to the Rock County High School Foundation.

Francis Duffy was born near Long Pine, Nebraska, on November 30, 1913 to Elwood and Nora (Kernan) Duffy, both long time pioneers in Rock and Brown counties. He learned early the value of a hard day's work and worked with his parents to keep... View Obituary & Service Information

The family of Mr. Francis Duffy created this Life Tributes page to make it easy to share your memories.

Francis Duffy was born near Long Pine, Nebraska, on November...