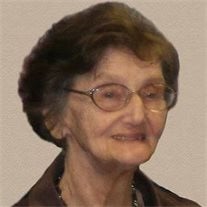 Francina Lucille Clapper was born on January 14, 1922 to Lester W. and Bertha (Miller) Kurtz at Long Pine, Nebraska, and passed away on November 19, 2012 at the Brown County Hospital in Ainsworth, Nebraska at the age of 90 years. Francina was the third of five sisters. She grew up in Long Pine, Nebraska receiving her education at Long Pine. After graduation, she received a Teachers Certificate from Wayne State College and later on in life she earned her LPN license from Alliance College of Nursing. Francina was united in marriage to Jack D. Clapper on August 23, 1941 at Valentine, Nebraska. Born to this union were 6 children, John, Mick, Dan, Lois, Janet and Denise. Throughout their lifetime together, the couple lived in Minturn, Colorado, Ft. Robinson, Nebraska, and later in Omaha, Nebraska while Jack served in the United States Army. When Jack returned from the war, they then moved to Newport, Nebraska, and Springview, Nebraska for a period of time, finally settling on a ranch south of Johnstown, Nebraska. She was a member of the Zion Lutheran Church, as well as a member of the Dorcas Society. Francina served many years on the Election Board, taught as well as served on the District 14 Rural School Board, and in later years, she worked at the old Ainsworth Hospital, and then at the Brown County Hospital. Francina was preceded in death by her parents, Lester and Bertha; her husband, Jack; two sisters, Gertrude Hollopeter and Lois Cooner; son, John D. Clapper; and one grandchild, Cory Hall. She is survived by her two sons, Mick Clapper of Ainsworth, Nebraska, Dan Clapper and wife Sandy of Johnstown, Nebraska; Three daughters, Lois Hall of Denver, Colorado, Janet Shaul and husband Monte of Oshkosh, Nebraska, Denise Robbins and husband Dennis of Alliance, Nebraska. 14 Grandchildren, and 26 Great-grandchildren. Sisters, Margaret Clapper of Ainsworth, Nebraska and Ruth Luehrs of Long Pine, Nebraska. Along with many nieces, nephews, and a host of friends. Funeral services were held on Friday, November 23, 2012 at the Zion Lutheran Church in Ainsworth, Nebraska with Pastor Georg Williams officiating over the service. Ciara Philben and Kyle Soflin provided the prelude and postlude. The organist was Georgia Williams. Special music selections of "Jesus Loves Me" were provided by Francina's grandchildren and great-grandchildren, led by Savannah Clapper, Ciara & Schylar Philben. Cody Shaul Boness sang "Amazing Grace". Pallbearers were, Roudy Clapper, Shane Clapper, Tyson Shaul, Ian Robbins, Jeremy Robbins, Dennis Robbins Lance Philben, and Michael Gomez. Honorary bearers were all of Francina's other family and friends. Hoch Funeral Home was in charge of the arrangements.

Francina Lucille Clapper was born on January 14, 1922 to Lester W. and Bertha (Miller) Kurtz at Long Pine, Nebraska, and passed away on November 19, 2012 at the Brown County Hospital in Ainsworth, Nebraska at the age of 90 years. Francina was... View Obituary & Service Information

The family of Francina L. (Kurtz) Clapper created this Life Tributes page to make it easy to share your memories.