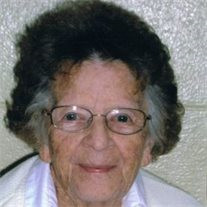 Fona W. Hall was born at Scottsbluff, Nebraska to Archie Lee and Bessa (Godfrey) Dishman on March 14, 1927 and passed away on November 1, 2013 at the Ainsworth Care Center in Ainsworth, Nebraska. Fona was the oldest of six children. She attended grade school while living on the ranch south of Dunning, Nebraska. Later they moved to Blaine County, where her parents bought the home ranch north of Brewster, Nebraska. They lived in a sod house at that time. Fona along with her brothers and sisters walked about a mile to the country school. After finishing the 8th grade, Fona started high school at Broken Bow, Nebraska but had decided she liked the Sandhills better, and began babysitting for a rural grade school teacher at the home school. Fona married Delmer Hall at Broken Bow on the 15th of December, in 1945. They had one daughter Deonna, who was killed in a car accident in 1971 at the age of 17 years old. Fona and Delmer ranched in Brown and Blaine counties. They were leaders in 4-H and Grass Judging. Delmer and Fona later bought a farm north of Ainsworth and lived there until Delmer passed away in 1975. Fona then moved to Ainsworth and boarded high school kids for several years. Later she had a Day Care for younger children in her home. She enjoyed being a part of the Historical Society and the Rock Hounds, as well as attending barbwire shows. Fona is preceded in death by her parents, husband Delmer, daughter Deonna, two brothers and one sister, along with nieces and nephew. She is survived by her brother, Dale Dishman and wife Evelyn of Sunrise Beach, Texas, her sister, Norma Davis and husband Paul Jr. of Ainsworth, her brother-in-law Harry Johnston of Brewster, Nebraska, along with nieces and nephews. Funeral services were held on Friday, November 8, 2013 at the Hoch Funeral Home in Ainsworth, Nebraska. Pastor Gary Graesser officiated over the service. Music was provided by Marjorie Wilkins with congregational selections of "Amazing Grace" and "Mansion Over the Hilltop" also being provided. Pallbearers were Fona's Great-Nephews, Archie Dishman, Bobby Dishman, Tyler Dishman, Dale Dishman, Josh Davis and Brady Davis. Honorary bearers were all of Fona's other family and friends. Burial was held at the Grandview Cemetery in Long Pine, Nebraska.

Fona W. Hall was born at Scottsbluff, Nebraska to Archie Lee and Bessa (Godfrey) Dishman on March 14, 1927 and passed away on November 1, 2013 at the Ainsworth Care Center in Ainsworth, Nebraska. Fona was the oldest of six children. She attended... View Obituary & Service Information

The family of Mrs. Fona W. (Dishman) Hall created this Life Tributes page to make it easy to share your memories.