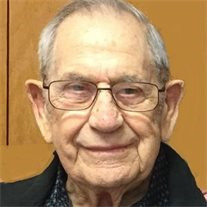 Floyd R. Crone was born on February 10, 1925 at the Crone homestead north of Brewster, Nebraska. He passed away in Ainsworth, Nebraska at the age of 90 years and 11 days. He was born the 8th child of Evan J. and Minnie (Blumenthal) Crone. Five sisters and two brothers were there to greet him. Two more sisters and two more brothers were added to the family, totaling twelve children. Floyd attended school at District 34 until the 8th grade and then went to school in Brewster. During his senior year at Brewster High School he enlisted in the U.S. Army. He later received his diploma as a graduate. On December 19, 1944 Floyd boarded a train in Ainsworth going to Camp Hood in Texas for 15 weeks of training. From Camp Hood he ended up at Camp Stoneman in California then boarded a ship and 28 days later landed at Luzon Island, Philippines. He was stationed there until the Japanese surrendered. He then boarded a ship and went to Japan. Floyd spent the remainder of his tour in Japan until he was honorably discharged on November 15, 1946. Upon returning to the states, Floyd went back to the Crone Ranch north of Brewster. In 1955 Floyd met Shirley J. Walton and on May 20, 1956 they were united in marriage. To this union two sons were born, Donald F. and Michael J. Floyd was managing the Farmers Ranchers Coop in Ainsworth when he married Shirley. In 1958 he purchased the Conoco Station, calling it Floyd's Conoco. After the station was sold, he went to work for Snyder's driving the tank wagon, delivering fuel throughout the area. He enjoyed driving truck until his retirement. Floyd was a 50 plus year member of the United Methodist Church, 25 plus year member of the Ainsworth Volunteer Fire Department, member of the American Legion Post #79, D.A.R., and Ainsworth Elks Lodge. He rodeoed and participated in calf roping for many years and enjoyed Sunday jackpot ropings. Floyd is preceded in death by his parents Evan J. and Minnie, sisters, E. Claire Andersen, V. Ruth Henderson, Nola Wilson, Wilda Diefenbaugh and Wilma Hawthorne; brothers, A. Orvan Crone and Evan "Tad" Crone, Jr. He is survived by his wife Shirley; sons Donald (Vickie) of Ainsworth and Michael (Kristin) of Omaha, Nebraska; sisters J. Evelyn McElgunn of Hilo, Hawaii and Beryle Banker of Britt, Iowa; brothers Eldan (Loretta) of Ft. Morgan, Colorado and Laurel (Kay) of Grand Junction, Colorado; grandchildren Cacee, Jacob, Madisen, Owen, Abigail and Cooper; sisters –in-law, Viola Crone of Blair, Nebraska and Judy Cole of Ainsworth; brother-in-law, Jim (Ginger) Walton of Ainsworth; along with many nieces and nephews. Memorial Services were held on Thursday, February 26, 2015 at the United Methodist Church in Ainsworth, Nebraska. Pastor Eldon Davis and Pastor Gary Graesser officiated the service. Music was provided by Linn Baxter. Special song selections of "Suppertime" by Joe McBride, as well as "Amazing Grace" by Vickie and Madison Crone were provided. Congregational selections of "Old Rugged Cross" and "Here I Am Lord" were also provided. Honorary bearers were, Cacee Crone, Jacob Crone, Madison Crone, Owen Crone, Abigail Crone and Cooper Crone. Special memories were given by family and friends. Taps and flag presentation was provided by the Ainsworth American Legion Post #79. Memorials were suggested to the Brown County Ambulance Association, the Ainsworth Volunteer Fire Department or to the family in Floyd's name. Hoch Funeral Home of Ainsworth was in charge of the arrangements.

Floyd R. Crone was born on February 10, 1925 at the Crone homestead north of Brewster, Nebraska. He passed away in Ainsworth, Nebraska at the age of 90 years and 11 days. He was born the 8th child of Evan J. and Minnie (Blumenthal) Crone. Five... View Obituary & Service Information

The family of Mr. Floyd R. Crone created this Life Tributes page to make it easy to share your memories.