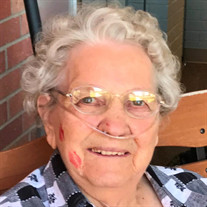 Faye Lauvon (Blake) Buoy, daughter of Edward Ellsworth Blake and Gladys June (Robinson) Blake was born May 31, 1932 at home in rural Rock County, NE. Mary Finnegan Stout, midwife and nearby neighbor of the Blake’s, delivered Faye. She passed away December 30, 2020 at the age of 88 at the Rock County Long Term Care in Bassett, NE with family at her side. Faye, along with her brothers Wallace, Clyde, and Archie grew up on the family homestead in the Kincaid Precinct in South East Rock County. She attended the rural “Blake” school south of her home near the “Witt” grove. Faye told stories of riding horseback with her brothers to school carrying a lard pail with her lunch inside. After grade school Faye attended Rock County High School living in the dormitory on the hill west of the high school, graduating in 1951. Faye shared stories of her childhood years and being the only daughter and having brother Clyde being involved in connecting her with her future husband Harry so that Clyde, Darline and Harry could have a double date for some special occasion. On December 29, 1950 Faye married Harry Kenneth Buoy at the courthouse in Ainsworth, NE. Five days later Harry was on the train leaving Bassett for his enlistment in the Army. During Harry’s time in the Army Faye lived with her family on the Blake ranch. Upon Harry’s discharge Faye, Harry, and Leanne moved to the homestead of Harry’s parents in southern Rock County. They purchased a few stock cows later adding milk cows, raising bucket calves, separating the milk for the bucket calves and selling cream to buy groceries, generally at the Rose Trading Post. Faye worked hard on the ranch side by side with Harry and still made time for a huge garden, canning and freezing and sewed most all of the clothing for the family. Faye was proud of building their cow herd and all the years of hard work allowing them to purchase the homestead from Harry’s parents in 1969. Faye enjoyed visiting with neighbors and being involved in community get-togethers. In 1983 Harry and Faye purchased the former Church of God building on Legnard Street in Bassett. They remodeled and this became their very comfortable “townhouse.” Later in the 80’s Faye moved into town part-time to work in housekeeping at the Bassett Lodge. After a couple of years she bought the former pharmacy building on Main Street Bassett and began selling refurbished furniture purchased at auctions throughout the area. After a few years she sold the building and once again spent time between the ranch and the townhouse. She spent hours making quilts for her kids and grandkids, embroidering, and doing wood working projects. Her hands were never idle. The last several years of Faye’s life found her body giving up to all the years of hard work with a hip replacement, shoulder replacement, and knee replacement. Shortly after her knee replacement and doing well with rehab she was stricken with a stroke that affected her being able to walk unassisted. Even though she was determined to not let it get the best of her she admitted herself to Rock County Hospital Custodial Care in March 2017. In May of 2019 Faye transferred from the Custodial Care unit to Rock County Long Term Care where she resided. Faye was preceded in death by her husband, Harry, her parents Ed and Gladys Blake, her parents-in-law John and Phyllis (Geist) Buoy, brothers Erwin, Wallace (killed in action – World War II), Iven, Clyde, and Archie; brother and sister-in-law’s, Roy Buoy, Floyd and Neva Buoy, Mervin Buoy (killed in action – World War II), Eldon and Kathy Buoy, Jewell Buoy, Jack Buoy, Dewayne and Margaret Buoy along with other aunts, uncles, nieces and nephews. Faye is survived by her six children, Leanne (Douglas) Fox of Bassett, Gary (Daunitta) Buoy of Burwell on the family ranch, Bonnie (Brad) Emerson of Bassett, Lonnie (Deb) Buoy of Bassett, Jerry Buoy of Laurel, and Cindy (Todd) Norton of Ainsworth, 18 grandchildren, 45 great-grandchildren, one great-great grandson; sisters-in-law Darline Blake of Bassett, Ila Mae Blake of Bassett, Sylva Buoy of Burwell, Elva Buoy of Long Pine and many nieces and nephews. Faye will always be remembered for many things, especially her love of her family. She enjoyed watching the birds at the ranch – fighting sparrows away from her bluebird house and watching them feed at the feeders outside her window while residing at long term care. She loved to quilt and embroidered lots up until not long ago gifting her children, grandchildren, and great grandchildren with her stitches of love. Faye had a huge garden when at the ranch and always raised chickens making the best fried chicken in her cast iron skillets. Never wanting to be a burden to anyone she was always very appreciative of anything done for her. Until the very last breath her “please” and “thank you” touched the wonderful staff who so loved her. A Graveside Service was held Saturday, January 2, 2021 in the Rose Hill Cemetery near Rose. Pastor Wayne Owens officiated at the services. The CD Selections by Alabama titled “I’ll Fly Away” and “Angels Among Us” were played. The obituary was read by Loranda Buoy. Casket bearers were: Shane Fox, Marty Buoy, Tyler Buoy, Shaun Emerson, Ryan Buoy, Casey Norton and Dustin Nachtman. Honorary Casket Bearers were: All of Faye’s Other Grandchildren and Great-Grandchildren. Memorials were suggested to the donor’s choice or to the family in Faye’s name for a future designation. Arrangements were under the direction of the Hoch Funeral Homes of Ainsworth and Bassett. Online condolences may be left for the family at www.hochfuneralhome.com.

The family of Faye L. (Blake) Buoy created this Life Tributes page to make it easy to share your memories.