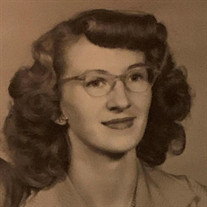 Fae Laree Sharp was born on August 9, 1934 on the Rohr Place near Brocksburg, Nebraska to Thomas and Myrtle (Hunt) Sharp. She passed away May 5, 2020 at her home in Ainsworth, Nebraska with family by her side. Fae attended grade school at Mabelo country school in Brown County and graduated from Ainsworth High School in 1952. She worked her way through high school employed by the Judge William Smith family and continued in clerical work for the Judge until she was united in marriage to Maitland L. Smith of Johnstown, Nebraska in December 1952. The couple lived early years in Nebraska, Colorado, Idaho, and Oregon returning to Johnstown and spent remaining years in Brown and Holt counties. To Mait and Fae’s union three children were born Michael, Cheri, and Marlin. Fae worked alongside Mait in his long haul trucking business for most of their 42 years of marriage. She enjoyed flying with Mait in his private planes where often times the landing strip was an alfalfa field or cow pasture when visiting family in the Sandhills. Fae was a very talented person with many ambitions. In earlier years she enjoyed art work, learning to paint with oils, and painted many landscape scenes. An avid seamstress all her life, she made clothing and quilts for many family members. Another of Fae’s favorite pastimes was raising canaries for many years. Their singing was music to her ears. She also loved dogs, which provided companionship to go on her evening neighborhood walks. Dolly and Fred were her last pets. They were always on her lap and were her constant helpers. A lover of history, Fae collected antique furniture and enjoyed refinishing many old pieces. She was fascinated with genealogy and researched both sides of the family for many decades, creating records for future generations. Known as Granny she will be remembered by her grandchildren for her famous quotes and attitudes on life in general, with one of the favorites, “Be reasonable, do it my way!” A caring and feisty woman, she enjoyed sharing her opinions and was never afraid to set someone straight. She was a unique woman who lived her life doing what she wanted to do. In Fae’s later years she was also a caregiver of many elderly people, including family members and a special friend Scottie Porter of Creighton, Nebraska, before moving back to Ainsworth to be closer to family. Fae was preceded in death by her husband ML (Maitland), her parents, baby sister Twila, brother Robert Sharp, son-in-law, Leonard Fernau and her companion Scottie. Leaved to mourn her passing are her children: Mike (Alice) Smith of Hill City, Kansas, Cheri Fernau of Ainsworth, Marlin (Peggy) Smith of Newport, Nebraska; 16 grandchildren and 26 great grandchildren; siblings, Ester Buhr of Ainsworth, Marvin (Sharon) Hart of Long Pine, Nebraska, Lila Daniels of Fort Scott, Kansas and Linda Douglas of Muscatine, Iowa, along with other family members and friends. Fae’s wishes were honored with her body being donated to Creighton University in Omaha for science education. Inurnment will be held at a later date in the East Woodlawn Cemetery at Johnstown, Nebraska.

Fae Laree Sharp was born on August 9, 1934 on the Rohr Place near Brocksburg, Nebraska to Thomas and Myrtle (Hunt) Sharp. She passed away May 5, 2020 at her home in Ainsworth, Nebraska with family by her side. Fae attended grade... View Obituary & Service Information

The family of Fae L. (Sharp) Smith created this Life Tributes page to make it easy to share your memories.