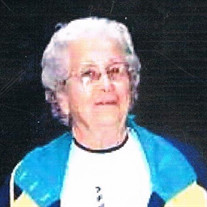 Lorene (Hayden) Kernan was born at Blackbird, Nebraska (North Holt Co.) on July 5, 1921 to Bertha (Rouse) and James R. Hayden. She passed away on May 1, 2021 at the age of 99 years at the Rock County Hospital Long Term Care Center in Bassett, Nebraska. As a small child she lived in Nebraska and Colorado. She grew up in Long Pine, Nebraska and graduated from Long Pine High School in 1939. Lorene taught school following normal training as soon as she was out of high school, from 1939 to 1988, with one year in Keya Paha County where she had 17 students in all classes, and the remaining years in Rock County. She married Fred Kernan on November 9, 1940 and moved to the farm northeast of Long Pine where she lived for 58 years until 1998. Their daughter Judith (Judy) was their pride and joy. In 1963, while teaching in the Pony Lake School in south Rock County, she taught her 16 students their music, colored their hair black, and fitted their costumes so they could play the parts of the king’s wives and children in the first musical, The King and I, to be produced at Rock County High School. She loved to read, sew, dance and play cards. She loved everything connected with the farm. She loved the children she taught and followed their progress as they went on to high school and college. She and Fred attended most school functions. Lorene completed her bachelor’s degree from the University of Nebraska in 1966 after attending four years of summer school. She was very active in many professional and educational organizations where she served in all offices. She promoted using educational television in the classroom and served as ITV Coordinator for Rock County Schools, directed ESU workshops in surrounding counties, and served on curriculum writing committees and teacher guide writing workshops in mathematics and language arts for Nebraska Educational Television. She was recognized as Educator of the Month in 1970 by NET. In 1973 she was appointed by Governor Exon as a member of the Nebraska Professional Commission of Education. She served 6 years in this role, traveling the state to various schools. She served on the Rock County High School Foundation Board and was a member of Delta Kappa Gamma and Kappa Kappa Iota, teaching societies. She retired from Bassett Grade School in 1988. Along the way, she was a director of the Long Pine Heritage Society and a member of the VFW, Rebekah Lodge, and the Long Pine Methodist Church. She also served as secretary of the Long Pine Alumni Association and on local election boards and the ASCS board. Lorene and her husband Fred were names Ak-Sar-Ben Good Neighbors in 1974, and Lorene was given the award a second time in 2002. Lorene loved life and lived it to the fullest. Her friends and former students were very important to her. She had many special friends and left a list acknowledging their names: Richard and Nancy Goble, Jack and Wardene Roark, Dora Johnson, Doris Newcomer, Kay Lynn Kalkowski, Mabel Koenig, Avis Moore, Donna Foxworthy, Bev and Jim Newport, Helen and Johnny Stec, Mary Gurney, and all her former teacher friends. Lorene was preceded in death by her husband, Fred in 1986, her parents, and a baby sister and older brother, William “Bill” Hayden, and younger brother Keith Hayden. She is survived by her daughter, Judy Kernan of Collbran, Colorado; sister-in-law, Donna Hayden of Boise, Idaho and family Jim, Barbra Jo and Janet; special niece, Joyce Muirhead and husband Neal of Valentine, Nebraska and their family David (Michelle) Nicole, and Devin (Brandy) Dillion and Logan, and members of Ray and James Munson families. “God hath not promised skies always blue, flower-strewn pathways all our lives through; God hath not promised sun without rain, joy without sorrow, peace without pain. But God hath promised strength for the day, rest for the labor, light for the way. Grace for the trials, help from above, unfailing sympathy undying love…” McKown Funeral Home of Columbus, Nebraska Funeral Services were held on Friday, May 7, 2021 at the Hoch Funeral Home in Ainsworth with Pastor Jenice Epp officiating at the service. The Obituary was read by Mary Gurney. Special Life reflections were given by members of the congregation. The CD Selection of “In the Garden” & “Amazing Grace” by Alan Jackson and ”Just A Closer Walk With Thee” by Mary Van Arsdale were played. Interment followed in Grandview Cemetery at Long Pine, Nebraska. Casket Bearers were: David Muirhead, Devin Muirhead, Dillion Muirhead, Logan Muirhead, Ervin Wulf and Tom Frank. Honorary Casket Bears were: Helen Stec, Mary Gurney and Kay Lynn Kalkowski and all of Lorene’s other friends and students she taught. Memorials were suggested to the Heritage House Museum of Long Pine in Lorene’s name. Hoch Funeral Home of Ainsworth was entrusted with the service arrangements.

Lorene (Hayden) Kernan was born at Blackbird, Nebraska (North Holt Co.) on July 5, 1921 to Bertha (Rouse) and James R. Hayden. She passed away on May 1, 2021 at the age of 99 years at the Rock County Hospital Long Term Care Center in Bassett,... View Obituary & Service Information

The family of F. Lorene (Hayden) Kernan created this Life Tributes page to make it easy to share your memories.