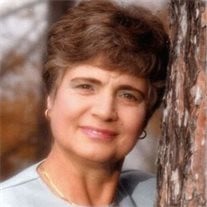 Frances "Marline" Crisman, age 81, passed away at Good Samaritan Hospital in Kearney, Nebraska, on Monday, June 9, 2014. She was born November 15, 1932 to Ivan and Marie Wicker in Springview, Nebraska. She was the youngest of three, joining a brother, Dwain and sister, Freda May. While attending school in Springview she helped on the family ranch, even returning the summer before her wedding to mow hay for her dad. Although she grew up through trying times, she remembered it fondly. This was the beginning of her becoming the woman she was. Marline graduated from St. Mary's High School in O'Neill, Nebraska and then moved on to receive her Teacher's Certificate from Springfield, South Dakota. While they were in college, Marline met and later married Melton Crisman in Wagner, South Dakota. They moved frequently early in their marriage and Marline taught for eight years in rural schools, and also in Huron, and Brookings, South Dakota and Omaha, Nebraska. Mel's job moved them to Des Moines, Iowa, Omaha, Nebraska, St. Louis, Missouri, Pittsburgh, Pennsylvania, and Philadelphia, Pennsylvania . While in Des Moines in 1965, they were blessed with a son, Mickal Allen. Their daughter, Susan Marie followed in 1967 while they were living in Omaha. While Mel made a career at Westinghouse, Marline made her home and children her career and she exceeded expectations. As they got older and she had some more time she enjoyed working part-time for her 'fun money'. She also took great pleasure in watching tennis and would stay up all night to watch it live. Marline could be described in many words and two of them would be tough and strong, she exhibited those traits until the very end. Caring, loving and giving are three more words. She was very sympathetic to other's situations and feelings. Mel and Marline retired to Rapid City, South Dakota in 1994. The beauty of The Hills appealed to them and they were much closer to family. Their world was crushed later that year by the death of their daughter, Susan. They were blessed with the chance to care for their granddaughter, Maria. Not long after Maria's graduation they moved to Long Pine, Nebraska to be near their son, Mike and his wife Kathy and children, Mickal Jr. and Mia. Her husband, Melton is left to mourn her loss, as well as her son, Mike and Kathy Crisman and grandchildren Mickal Jr., and Mia, all of Long Pine, and granddaughter, Maria Crisman of Rapid City, South Dakota. There are also numerous nieces, nephews, cousins, and other family that are saddened by this loss. We know there is a great reunion taking place with Marline and her daughter Sue, her parents Ivan and Marie Wicker, brother Dwain Wicker, sister Freda May Thiede, nephew John Thiede and many other family and friends that have passed before us. Marline will be honored Monday, June 16th, 2014 at 10:30am at Hoch Funeral Home in Ainsworth, NE., with burial to follow in Grandview Cemetery in Long Pine, NE. The family is welcome at Mel and Marline's home afterward for a light lunch and remembering an extraordinary woman. Memorials are asked to be sent to the family for a future designation. Officiating the service for Marline was Pastor Chris Gudgel. Music was provided by Sherry Campbell and Kristy Beegle. Special song selections of "I Can Only Imagine" and "Because He Loves Me" were also provided. Pallbearers were, Jon Ireland, T.J. Dunn, Bruce Crisman, John Crisman, Richard Thiede and D.D. Linse. Honorary Bearers were all of Marline's other family & friends. "Amazing Grace" was sang at the cemetery by Kristy and Chris.

Frances "Marline" Crisman, age 81, passed away at Good Samaritan Hospital in Kearney, Nebraska, on Monday, June 9, 2014. She was born November 15, 1932 to Ivan and Marie Wicker in Springview, Nebraska. She was the youngest of three, joining... View Obituary & Service Information

The family of Mrs. F. Marline Crisman created this Life Tributes page to make it easy to share your memories.