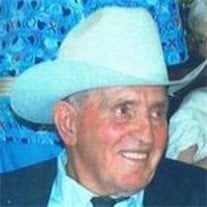 Everett F. Moore was born July 17, 1932, to John and Mabel (Knapp) Moore at Johnstown, Nebraska. He was born in the house on the homestead where he spent most of his life. He passed away Thursday, September 11, 2014 at the Ainsworth Care Center at the age of 82 years. Everett attended school in Johnstown and was a life long resident of Brown County. Everett was united in marriage to Marianne Lewis on April 22, 1955 in Ainsworth. They spent 40 years together and were blessed with 7 children. Everett loved his place east of Johnstown and enjoyed nothing more than being able to walk the pasture and tend to his cattle. Everett spent the last 8 years of his life as a resident of the Ainsworth Care Center where he was beloved by the staff and fellow residents. He continued to be an active participant in the running of his place with his most recent visit on September 6, 2014. He was a man who lived his faith and an active member of the Ainsworth Assembly of God Church and Gideon's International. Everett was preceded in death by his parents; wife, Marianne; sons, Robert and Scott; sister, Veloris and brother, Richard. He is survived by 3 daughters, Debbie(Dan) Baggenstoss of Plattsmouth, Nebraska, Wanda Moore of Los Angeles, California, Annette Gedwillo of Johnstown; 1 son, Conrad Eaglefeather of Mission, South Dakota; 13 grandchildren including. Madonna Elmore, Miranda McKillip, Nathan, Jacob and Lucas Baggenstoss; 3 great-grandchildren, Madison and Kaitlynn Elmore; sisters, Sharon Moore and Shirley Ellison both of Wheat Ridge, Colorado; sister-in-law, Myrna(Lowell) Bargen of Lincoln, Nebraska and numerous nieces, nephews and cousins. Funeral services were held on September 15, 2014 at the Assembly of God Church in Ainsworth with Pastor Gary Graesser. Music was provided by Marjorie Wilkins and special music selections of "The Last Mile" and "Because He Lives" were provided by Bob & Duane Keim, along with congregational selections of "How Great Thou Art" and "When the Roll is Called Up Yonder." Pallbearers were, Nathan Baggenstoss, Jacob Baggenstoss, Lucas Baggenstoss, Bruce Baggenstoss, JD Dillon and Steve Goeken. Honorary bearers were, Dave Seadore, Bernie Martin, Jim West, Frank Williams, Duane Sedlacek, Allen Baragar , Brent Johnson and Louis Larabee. Burial was held at the East Woodlawn Cemetery near Johnstown, Nebraska under the direction of Hoch Funeral Home of Ainsworth. Memorials were directed to the family in Everett's name.

Everett F. Moore was born July 17, 1932, to John and Mabel (Knapp) Moore at Johnstown, Nebraska. He was born in the house on the homestead where he spent most of his life. He passed away Thursday, September 11, 2014 at the Ainsworth Care... View Obituary & Service Information

The family of Mr. Everett F. Moore created this Life Tributes page to make it easy to share your memories.