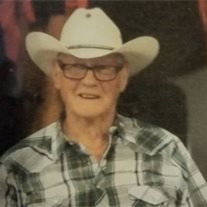 Everett A. Densberger was born on July 13 1938 in Holt County Nebraska at the home of his grandparents to Warren A. "Bob" and Muzetta (Brown) Densberger, and passed away on December 8, 2016 at the VA Black Hills Health Care System in Hot Springs, South Dakota. He attended grade school in Keya Paha County and at Brewster Nebraska. In 1953 the family moved to a farm near Johnstown, Nebraska where Everett entered Ainsworth High School as a freshman. After two years, he enlisted in the United States Army where he finished his high school education and spent three years of active duty in Germany. Everett was married to Pauline Ingalls in 1959, and to this union three daughters were born, Teresa, Christina, and Lisa. Everett worked for Corbitt Motors which later became Ainsworth Motors and he was proud to have been a 50 year employee in 2011, both as a mechanic and a driver. He also owned his own business for 15 years, called Everett's Dairy. On June 17th, 1983 he was united in marriage to Judy (Mohr) Adkisson at Valentine Nebraska. They enjoyed 33 years together with their combined families. Everett was a faithful member of the Ainsworth Volunteer Fireman for many years serving two terms as fire chief. He also took the first EMT class offered in Ainsworth in 1974, to volunteer as a member of the Brown County Ambulance Association. He also was a member of the Ainsworth Elks Lodge #1790 and the Long Pine American Legion Post #260. Everett was preceded in death by his parents, Bob and Muzetta; a stepmother, Freeda; a brother Kenneth; and his youngest daughter, Lisa. Survivors include his wife, Judy; daughters, Teresa and her husband, Roy Einspahr of Tacna Arizona; Christina, along with her husband Tom Swett of Hot Springs South Dakota; Step-sons, John and his wife Meg Adkisson, of Edina Minnesota; Jason and his wife Tarin Adkisson of Amelia Nebraska. Six grandchildren, Jesse and his wife, Brittany Swett, Dagon and his wife, Jennifer Einspahr, Brittany, and her husband, Caleb Brown, Morgan, Vanessa, and Alexis Cooper. Six step-grandchildren, Cameron, Samuel, William, Jaksen, Asher, and Allie Adkisson; along with six great-grandchildren. Also, one sister-in-law, Vernal Densberger of Shamrock Texas, plus three nieces. Funeral services were held on Monday, December 12, 2016 at Hoch Funeral Home in Ainsworth. Pastor Bruce Beebout officiated the service. Music was provided by Melanie Coffman and Dan Carson with special selections of "Satisfied Mind" and "Peace In The Valley." Pallbearers were, Frank Brown, Jim Schendt, Bob Wilson, Bill See, Bret Younkin, and Gary Baxter. Honorary bearers were Jesse Swett, Dagen Einspahr, Caleb Brown, Cameron Adkisson, Samuel Adkisson, William Adkisson and all of Everett's other children and great-grandchildren. The Eulogy was given by Tom Swett. Organizational Rites were given by the Ainsworth Elks Lodge # 1790. Burial followed at the Ainsworth Cemetery with Military Honors being provided by both the Long Pine American Legion Post #260 and the Bassett American Legion Post #123. In lieu of flowers, memorials are suggested to the Ainsworth Volunteer Fire Department, the Brown County Ambulance, or to the Long Pine American Legion Post #260.

Everett A. Densberger was born on July 13 1938 in Holt County Nebraska at the home of his grandparents to Warren A. "Bob" and Muzetta (Brown) Densberger, and passed away on December 8, 2016 at the VA Black Hills Health Care System in Hot Springs,... View Obituary & Service Information

The family of Mr. Everett Arch Densberger created this Life Tributes page to make it easy to share your memories.