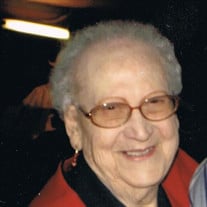 Eunice Marie (McNamee) Howard was born on the family ranch northwest of Johnstown on December 31, 1931 to Leonard and Eva (Richardson) McNamee. She passed away on June 30, 2019 at the Sandhills Care Center with her loved ones by her side. She was united in marriage to James M. Howard in the Johnstown Methodist Church on August 2nd, 1953. To this union they were blessed with a Son Jimmie Howard and daughters Lori Clopton and Niki Songer. Eunice attended grade school in Johnstown and high school in Ainsworth, graduating in 1949. She also graduated from Chadron State College receiving a Bachelor of Science in Education Degree. She taught 42 years in schools in the counties of Cherry and Brown in Nebraska, and also in Todd County in South Dakota. Eunice enjoyed baking, (especially holiday treats,) reading, dancing and socializing at Carlock, writing poetry and playing with her grandchildren. She was a member of the Ainsworth Assembly of God Church. After retiring from teaching in 1995 she volunteered a couple of years to teach GED classes in Ainsworth. She, for a time also cooked and cleaned for the elderly. In 2006 she joined the Kitchen Band of the Ainsworth Senior Center and looked forward to Mondays so she could play. Eunice was also a member of the “BO JU” band. At the Senior Center she started the Domino game of “Chicken Foot” and she also volunteered at the Care Center to play “Chicken Foot” with the residents. Eunice was preceded in death by her parents, an infant sister Elsie, her husband James, sisters, Ellen Duffield, Faye Ingalls Hartgrave, Lora Ingalls and two brothers, Nyle and Lee McNamee. She is survived by son, Jimmie Howard of Ainsworth; daughters, Lori (JC) Clopton of Ainsworth and Niki (Daniel) Songer of Norfolk, Nebraska. Two grandchildren, Shelby (Luis) Lierman of Wakefield, Nebraska and Derek (Shay) Lierman of Wayne, Nebraska. Three great-grandchildren, Nayvi, Journi and Brantley; numerous nieces and nephews and a special friend, Hank Kerner of Gregory South Dakota. Funeral Services were held at the Ainsworth Assembly of God Church with Pastor Gary Graesser officiating the service. Music was provided by Myra Williams. Special selections of “The Dance” by Jon Anderson, “How Great Thou Art” as the congregational hymn and a CD selection of “I Want To Stroll Over Heaven With You” by Alan Jackson were all provided. Casket bearers were, Aaron Jackman, Clint Painter, Chad Hollenbeck, Adam Beel, Kevin Reece, and David Duffield Jr. Honorary bearers were all of Mrs. Howard’s other former students. Interment followed at the Mt. Hope Cemetery in Wood Lake, Nebraska. In lieu of flowers, memorials were suggested to the family for a future designation. Hoch Funeral Home of Ainsworth was in charge of the arrangements.

Eunice Marie (McNamee) Howard was born on the family ranch northwest of Johnstown on December 31, 1931 to Leonard and Eva (Richardson) McNamee. She passed away on June 30, 2019 at the Sandhills Care Center with her loved ones by her side. She... View Obituary & Service Information

The family of Mrs. Eunice M. Howard created this Life Tributes page to make it easy to share your memories.