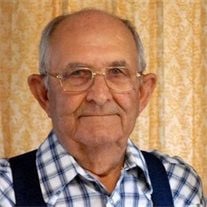 Russell Eugene Crawford, 83, died March 6, 2015, at the Brown County Hospital in Ainsworth, Nebraska. He was born March 24, 1931, in Ainsworth to Lloyd Dale "Bud" and Ruth Viola (Salzmann) Crawford. Russ was raised on the family farm four miles northwest of Ainsworth. He attended school at District 13 through eighth grade, and was a 1949 graduate of Ainsworth High School and played football for the Bulldogs. He worked on the family farm until he entered the Army and served in South Korea during the Korean War. He returned to the family farm, where he farmed for a number of years. In 1958, he married Lola (Smith) Webster of Ainsworth. She had two children, Joan and Gilbert, who Russ later adopted. He and Lola had two sons, Russell Jr. and Robert Dale "Bobby." They lived on the family farm for several years. The family then moved to Lincoln, where they lived for a short time. Russ worked on construction and at the Alpo factory in Crete. After returning to Ainsworth, Russ later worked at the Ainsworth Sale Barn while Lola ran the sale barn café. Russ' main life career was working in filling stations. During that phase of his working life, he worked at the Conoco Station, at Baxter's, and for the COOP. Russ enjoyed visiting with the customers, often learning their life stories while the gas pumped, and he often went the extra mile to serve them. After his retirement, Russ discovered he had a 'green thumb' and developed a great interest in growing roses and gladiolas, which he shared with the senior center, the hospital, assisted-living facility, and others. Another source of pride was the awards that he routinely won at the Brown County Fair. He also had a special love for history, especially of the World War II and Korean War eras, and enjoyed retelling the stories he learned from books and TV documentaries. A highlight for him was the chance to visit Normandy and the American Cemetery nearby. He also enjoyed sharing his military experiences with grade school classes on Veterans Day. Russell was preceded in death by his parents; his grandparents; a sister, Alberta Kinkead; a daughter, Joan Dixon; his son, "Bobby"; the mother of his children, Lola; and a niece and a nephew. He is survived by his sons, Russell Jr. (Sophie) of Ada, Ohio, and Gilbert of Las Vegas; his sister, Patricia Dannatt of North Platte; his son-in-law, Steve Dixon of Omaha; grandchildren Michelle Jenson and Steve Dixon of Omaha, Tiffanie and Valentin Seillier of Findlay, Ohio, Chloé Zarazúa of Thorigny-sur-Marne France; and great-grandchildren Raphael and Gabriel Zarazúa and Tristan Seillier; Zachary and Aubrey Jenson, Logan, Aiden, Jenna,and Ava Dixon; and great-great-grandchild Zoé Jenson and several nieces and nephews. Memorial Services were held on Monday, March 9, 2015 at the Congregational United Church of Christ in Ainsworth with Pastor Neva Murphy. Music was provided by Dorie Palmer with Dottie Arent singing "The Lord's Prayer" and Mike and Peggy Hitchcock singing "Life's Railway To Heaven." Honorary Bearers were: Cindy Bower, Stella Dickau, Sharon Swett, Ken and Nancy Falk, Jim Walton, Ron Andrus and Dan Woods. Inurnment was in the Ainsworth Cemetery with Military Honors by Ainsworth American Legion Post #79. Hoch Funeral Home of Ainsworth was entrusted with the service arrangements.

The family of Mr. Russell Eugene "Russ" Crawford created this Life Tributes page to make it easy to share your memories.