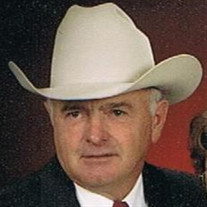 OBITUARY OF EUGENE “GENE” A. COSGROVE Gene Cosgrove was born October 16, 1941 to Frank T. and Grace J. (Koenig) Cosgrove in Stuart, NE. He was raised with his two brothers on a ranch five miles west of Bassett, NE. He attended a one-room schoolhouse for his grade school education and graduated from Rock County High in 1959. After graduation, he moved to Lincoln, NE and attended Lincoln School of Commerce where he met the love of his life, Gwen Vavrina. Gene and Gwen married on August 31, 1963, in Brainard, NE. To this union, three children were born: Beth, Keith and Kaye (the twins). Gene and Gwen built a home on Gene’s home place, where they raised their children. He loved ranching, farming, riding the sale ring at Bassett Livestock, and donating his time to the community. Gene served on numerous local boards, including the Rock County ASCS board for 25 years, which he served as chairman for 9 years; Rock County Agricultural board; and Rock County High School Board of Education, which he was president for 12 years and handed his children their high school diplomas. He also served on the Rock County Hospital Board, Rock County Rural Fire Board, Rock County High School Foundation, and Holy Cross Catholic Church Council. He was a member of the Knights of Columbus, American Legions Post #123, Rock County Area Development, and Treasurer of the Nebraska Ranch Expo. Gene passed his passion for ranching on to his son Keith and grandson Cash, who are currently running Cosgrove Farm & Ranch. He enjoyed life and was able to take a hard day of work and make it enjoyable. Grandpa Gene always seemed to have a granddaughter on his lap during holiday gatherings. The Cosgrove laugh could be heard often. Sitting still was not an option for Gene. Family and friends fondly remember him flipping his pen or jackknife while watching TV or carrying the desk phone – which had a 25-foot cord – while he paced as he talked. Gene passed away September 15, 2020, at Parkside Manor in Stuart. Gene is survived by his wife, Gwen, of 57 years; daughters Beth (Jerome) Murphy of Stuart and Kaye (Jay) Stewart of Newport, NE; son Keith (Tami) Cosgrove of Bassett. Seven grandchildren: Jessica (Joe) Murphy-Vavrina of Lincoln; Jerad (Anna) Murphy of Grand Island, NE; Cash, Skylar and Allie Cosgrove of Bassett; and Rachel and Jayden Stewart of Newport. Two great grandsons, James and Elijah Murphy of Grand Island. Two sisters-in-law, Ann Cosgrove of Johnson Lake, NE and Beth Cosgrove of York, NE along with three nieces and one nephew. He was preceded in death by his parents Frank and Grace Cosgrove, his older brother Jim, younger brother Darrell & infant sister Kathy Jo. Graveside Services were held on Saturday, September 19, 2020 in the Bassett Memorial Park Cemetery. Father Michael Stec officiated at the service. Casketbearers were: Jessica Murphy-Vavrina, Jerad Murphy, Cash Cosgrove, Skylar Cosgrove, Allie Cosgrove, Rachel Stewart and Jayden Stewart. Honorary Casketbearers: James Murphy and Elijah Murphy. A Memorial Mass will be held at a later date. Memorials were suggested to the family in Gene’s name for future designation. Arrangements were under the direction of the Hoch Funeral Homes of Bassett.

OBITUARY OF EUGENE &#8220;GENE&#8221; A. COSGROVE Gene Cosgrove was born October 16, 1941 to Frank T. and Grace J. (Koenig) Cosgrove in Stuart, NE. He was raised with his two brothers on a ranch five miles west of Bassett, NE. He attended a... View Obituary & Service Information

The family of Eugene A. "Gene" Cosgrove created this Life Tributes page to make it easy to share your memories.

OBITUARY OF EUGENE “GENE” A. COSGROVE