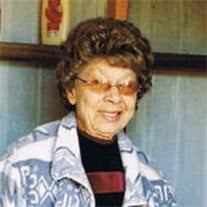 Esther Laura Augusta Zeigler, 95, of Ainsworth, Nebraska passed away August 20, 2017 at Rock County Hospital Long Term Care in Bassett, Nebraska. Esther was born at her grandmother's house, in Ainsworth, Nebraska to Louis and Marie (Chrust) Schneidereit on March 1, 1922; the oldest of five children. Esther's long, hard-working, prosperous and influential life began. As a child, she attended grade school at District #20 German Valley School, which was a four mile ride by horse and buggy. During the summer, she would help her father in the fields working with four head of horses. She also milked cows and helped with all outside work, which she enjoyed. At the age of twelve, she started to record her life, in her first diary. She wrote in it daily, for 83 years, up until the past couple weeks. Esther attended high school in Brewster, Nebraska. Here, Esther learned to speak English, for German was her known language. In 1942, she graduated from Brewster High School and soon after traveled to Chicago, Illinois to work for a short time in a defense plant. She returned to Nebraska and began work at the Farmers Union Store in Brewster, where she was manager until September of 1947. On October 19, 1947, she was married to Leslie M. Zeigler. Together they moved to and worked on several ranches. Three children were born, Shirley Jean, Larry Dean, and Richard Lee. In 1963, they moved from the Armstrong place near Dunning, Nebraska, to Ainsworth, where they bought the Midwest Hotel. They sold the hotel in 1968 and Esther transitioned through several jobs, social work being one of them. In 1982, she began to touch the lives of many as she started caring for the sick and elderly in their homes. As time passed, those she cared for became younger than her, for she continued to give, love and influence lives until her death. Esther was a true German; she would fulfill the needs of others before her own. Esther was devoted to the Lord. She attended St. John Lutheran Church in Brewster and served the Lord all her life; this was her biggest focus. Her children, who she would worry about until her final day, grandchildren, great-grand children, family and friends were all loved deeply and were daily recipients of her generosity and kindness. At 95, Esther was living at home and cooking dinner/lunch daily, for her sons. She was a wonderful cook and she would prepare a meal for any family who could join. There was always something coming out of the oven or off the cook top. Apple crisp was a favorite, with a dollop of ice cream; she loved ice cream. She also loved to garden and preserve vegetables. Canning became an all-day family event, as her children, grandchildren and great-grand children would help with the canning process. When she was not in the kitchen, chores filled her day. Esther had her cats and chickens to feed and eggs to gather and maybe a load of laundry or two. She did not have time to sit. One of her last goals in life was to read through all the letters and Christmas cards she had ever received and to read 83 years of diaries again. This took her over a year, but she accomplished it and so much more. Esther was preceded in death by her husband, Leslie Zeigler; parents, Louis and Marie (Chrust) Schneidereit; sisters, Elsie Hughes, Evelyn Gabriel, and Elaine Martelle, and brother, Carl Schneidereit. She is loved deeply and survived by her children, Shirley (Dan) Carson of Purdum, Nebraska, Larry (Konny) Zeigler of Ainsworth, and Richard Zeigler of Ainsworth; eight grandchildren; three great -grandchildren; along with nieces and nephews; and sister-in-law, Ramona Zeigler of Eugene, Oregon. Funeral services were held at the Zion Lutheran Church in Ainsworth, Nebraska with Pastor Georg Williams officiating the service. Georgia Williams provided the music with the Congregational selection of "I Know My Redeemer Lives." Other special selections of "I'll Fly Away," "Jesus Loves Me," and "Dancing In the Sky" were provided by Christy Peterson, Cindy Uden. Pallbearers were, Chad Carson, Colt Carson Josh Zeigler, Zachary Zeigler, Suttyn Zeigler, Ivan Schneidereit, Justin Dearmont, Jake Carson and Chase Carson. Honorary bearers were Rachel Dearmont, Heidi Zeigler, Robyn Zeigler, Cody Carson-Brown, Dillon Bacon and Anna Townsend. Burial followed at the German Valley Cemetery at Brewster, Nebraska. Memorials were suggested to the family for a future designation. Hoch Funeral Home was in charge of the arrangements.

The family of Esther L. Zeigler created this Life Tributes page to make it easy to share your memories.