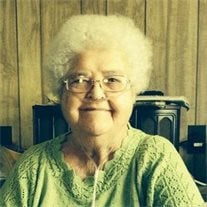 Esther B. Davis was born at Duff, Nebraska on March 19, 1923 to Henry "Bud" and Lena (Seier) Davis, the second of five children. She passed away on February 24, 2015 at the Brown County Hospital in Ainsworth, Nebraska surrounded by the love of her family. Esther graduated from Rock County High School, in Bassett, Nebraska. After graduation, she worked as a waitress where she met the love of her life. W. Duane Woods and Esther were united in marriage, after a short courtship, in Atkinson, Nebraska on May 10, 1943. To this union five children were born, Peggy Ann, Kenneth Duane, Betty Jean, Sherrie Lee, and Kathy Jo. After marrying, they moved to the Albion, Nebraska area with Duane farming and Esther setting up house and caring for their children. Later on, they moved back to the Bassett area working on several farms then acquiring their own land for farming. In the 1950's, they purchased a house in Newport, Nebraska where they lived and raised their children. Esther always raised a large garden and worked late in the evening making sure all the weeds were out. She had a little competition going on with her neighbor on whose garden looked the best and who could raise the most produce. She liked to sew and made a lot of clothing for her family. After leaving the farming and selling their property in Newport, they went to Colorado to reside closer to their son. But missing Nebraska, they purchased some property in the outskirts of Ainsworth. Before getting moved back Esther lost her husband in 1981. Esther went ahead and settled in the Ainsworth area and called on her lifelong skill of cooking and cooked at several of the cafés in Ainsworth. To fill her spare time when she wasn't spending time with family, she crocheted and embroidered. She loved to travel and had the opportunity to make several trips with family and one with friends. She was a dedicated mother, wife, grandmother and will be greatly missed. Esther was preceded in death by her parents, Bud and Lena; husband, W. Duane; daughter, Peggy Ann; step granddaughter, Kim; and sisters, Darlene Pavelka and Lucille Whitmore. She is survived by son, Kenneth (Sharon) Woods of Vida, Oregon; three daughters, Betty Derr of Ainsworth, Kathy Woods of Fort Pierre, South Dakota, Sherrie (Garry) Graham of Valentine, Nebraska; her grandchildren, K. Rodney (Holly) Woods of York ,Nebraska, Vicki (Brian) Schmer of Omaha, Nebraska, Michael (Paige) Stewart of McDonough, Georgia, Janice (Terry) Sapp of Cochran, Georgia, Linda West and special friend, David of Cook City, Virginia, Wendy Graham of Fort Pierre, SD. and J.W. (Sarah) Graham of Valentine; along with great-grandchildren, Evan and Emily Schmer, Beau, Hope and Kaylee Woods, Christina and Jessica Sapp, Dakota and Carl West; step-grandchildren, Kenneth and Cassie; and a sister, Grace Holcomb of San Antonio, Texas and brother, Raymond (Margaret) Davis of Bassett, Nebraska along with a host of nieces and nephews, and extended family and friends. Funeral Services were held on March 3, 2015 at Hoch Funeral Home in Ainsworth. Pastor Georg Williams officiated over the service. CD selections of "Amazing Grace" by The Statler Brothers, "When I Get Where I'm Going" by Brad Paisley, and "Heaven Got Another Angel" by Gordon Garner were provided. Burial was held in the Bassett Memorial Park Cemetery in Bassett, Nebraska. Memorials were suggested to the Brown County Hospital or to the family in her name.

Esther B. Davis was born at Duff, Nebraska on March 19, 1923 to Henry "Bud" and Lena (Seier) Davis, the second of five children. She passed away on February 24, 2015 at the Brown County Hospital in Ainsworth, Nebraska surrounded by the love... View Obituary & Service Information

The family of Mrs. Esther B. (Davis) Woods created this Life Tributes page to make it easy to share your memories.