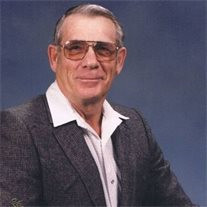 Erwin Lee Keim, age 91, passed away on April 4, 2017 at O'Neill, NE. He was born January 31, 1926 to Frank and Gertrude Keim. He was the youngest of 8 children and spent his boyhood years on the family farm in and near the Plum Creek canyon, north of the Mabelo community. He was drafted into the US Army in July of 1944 and took basic training at Camp Walters, Texas. He was shipped overseas in January of 1945 where he served with the 43rd Infantry Division in the Philippine Islands until the atom bomb ended the war in August of 1945. He was then sent to Japan where he served for several months with the U.S. occupational forces and was honorably discharged in February of 1946. In September 1947, Erwin married Bonnie Oakes and this union was blessed with a son, Dale, and a daughter, Charlotte. The family lived in Idaho for many years until he and Bonnie were divorced. In 1972 Erwin returned to Ainsworth and on December 2, 1972, he married Marie (Sherman) Sorensen. They made their home in Ainsworth until September 1978, when he and Marie moved to Idaho, where they spent the next 20 years. Upon retirement they returned to Ainsworth to be closer to some of the family. Erwin spent several years working in transportation, driving charter buses and taxi cabs in the Sun Valley, Idaho area. He was privileged to have served many celebrities. A few of his favorites were John Wayne, Clint Eastwood, Julie Andrews and Art Linkletter. After Erwin and Marie moved to Idaho they both worked for Caldwell Bus Company as driver and hostess. They both enjoyed this work and met and made many friends. Later, Erwin worked for an oil company and retired from it. During his retirement he kept busy at various part time jobs, including working along with Marie doing maintenance for the Ainsworth Park Homes. Erwin enjoyed cowboy poetry and memorized and recited many poems. He and Marie enjoyed attending cowboy poetry and music gatherings. He also wrote poems of happenings in his life about family and friends. Erwin spent many hours entertaining himself with the harmonica and continued to do so even after he went to the Care Center. Hymns were his favorites. Erwin always said he was blessed to have lived and worked in both Idaho and Nebraska. He loved the beauty of the Nebraska Sandhills and also the mountains and wild rivers of Idaho. Erwin suffered from Alzheimer's disease the last few years of his life. This horrible disease tragically robbed him of his cherished memories, but he never lost his smile. He was well-known at the nursing home for his special smile. Erwin was a member of the United Methodist Church of Ainsworth and a member of the American Legion Post 79. Erwin was preceded in death by his parents, his sisters, Francis, Ruth, and Fern, and his brothers Clair and Ray. Survivors include his best friend and wife of 44 years, Marie, his son Dale (Wanda) Keim of Stayton, Oregon, his daughter Charlotte (Joe) Braden also of Stayton; four grandchildren, Ryan, Jana, Justin and Tyson; two step-children, Linda (Milt) Loeb of Grand Island, Nebraska, Steve Sorensen of Burwell, Nebraska; four step-grandchildren, Anne, Tangee, Chrissy and Shane; nine great grandchildren and nine step-great grandchildren. He is survived by two brothers, Dale of Provo, Utah and Ralph of Lincoln, Nebraska, along with nieces and nephews. Funeral services were held at the United Methodist Church in Ainsworth, Nebraska with Pastor David Randall officiating over the service. Music was provided by Sherry Campbell. Special song selections provided by Bob and Duane Keim were, "God Of The Mountain," "Far Side Banks of Jordan" and "Suppertime." Pallbearers were, LaMoine Hoagland, Darin Sherman, Brad Sherman, David Sherman, Stan Pennington, and Jimm Johnson. Burial followed at the Ainsworth Cemetery with Military Honors being provided by the Ainsworth American Legion Post #79. Hoch Funeral Home was in charge of the arrangements. In lieu of flowers memorials were suggested to the family for a future designation.

Erwin Lee Keim, age 91, passed away on April 4, 2017 at O'Neill, NE. He was born January 31, 1926 to Frank and Gertrude Keim. He was the youngest of 8 children and spent his boyhood years on the family farm in and near the Plum Creek canyon,... View Obituary & Service Information

The family of Mr. Erwin L. Keim created this Life Tributes page to make it easy to share your memories.