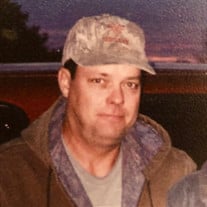 Ernest Dean Titus was born July 8, 1958 to Gerald Dean Titus and Lois I. Titus. He passed away, May 10, 2019 at the age of 60 years, 10 months and 2 days at his home in Bassett, Nebraska. He attended grade school at District 17 and high school at Keya Paha High School and graduated in 1976. November 21, 1990 he married Jeanette Brown. A son, Dustin was born, April 11, 1991. Later Jeanette and Ernest were divorced. Ernest worked various jobs over the years. One job was driving truck to the East Coast delivering freight. His first trip was to New York, and it was quite an experience for him, as he had never been there before. Later he worked for Stu Bickham for a while. He decided he really liked farming. He then started working for Tom Frank, and worked for him for a number of years, until Tom retired a few years ago. Ernest then bought his house in Bassett and moved to town. He worked at Sandhills Implement, and then moved on to deliver water for Seven Springs at Long Pine. He didn’t really care for that job and quit to seek a different job, but was having a hard time finding one at 60 years of age. Ernest was preceded in death by his father, Gerald Titus; grandparents, Fred and Irene Titus, and George and Minnie McDaniel; one niece, one great-nephew, one great-great-nephew, and sister-in-law, Lisa Titus. He is survived by his son, Dustin Titus (Otilia) and granddaughter, Teya all of Lincoln, Nebraska; Mother, Lois Titus of Springview, Nebraska; Sisters, Linda Keever (Stan) of Winner, South Dakota, and Jean Bucholz of Mitchell, South Dakota; Brother, Edward Titus of Springview. A private family graveside memorial service was held on June 29, 2019 at the Mt. Hope Cemetery near Springview, with Pastor Tim Wyrick officiating the service. Memorials were suggested to the family in his name. Hoch Funeral Home of Ainsworth assisted with the arrangements. Memorials are suggested to the family in his name and can be sent to either his son, Dustin Titus: 2021 Booth Circle Lincoln, Nebraska 68521 OR to his mother, Lois Titus: 43301 902nd Rd. Springview, Nebraska

Ernest Dean Titus was born July 8, 1958 to Gerald Dean Titus and Lois I. Titus. He passed away, May 10, 2019 at the age of 60 years, 10 months and 2 days at his home in Bassett, Nebraska. He attended grade school at District 17 and high school... View Obituary & Service Information

The family of Mr. Ernest D. "Ernie" Titus created this Life Tributes page to make it easy to share your memories.