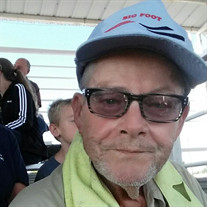 Ernest L. “Ernie” Marvin was born January 20, 1943 at Creighton, Nebraska to Don C. and Mabel O. (Wallace) Marvin. He passed away October 5, 2019 at the West Holt Memorial Hospital in Atkinson, Nebraska at the age of 76 years, eight months and 15 days. Ernie entered into the United States Air Force on May 24, 1963 at Omaha, Nebraska. He received an honorable discharge on August 26, 1963 at Lackland Air Force Base in San Antonio, Texas with the rank of AB E-1 (P). Ernie worked for the Nebraska Department of Roads, National Hog Farms along with various other jobs. He was preceded in death by his parents; by two sisters, Clara Mae Hansen and Darlene Denny and a brother, Kenneth Marvin. Ernie is survived by his son, Jeff Marvin and wife, Angie of Superior, Nebraska; two grandchildren; mother of his son, Nina Marvin of Ainsworth; siblings, Larry Marvin of Fremont, Nebraska, Dorothy Frederickson of Hobbs, New Mexico, LaRayne Halligan and husband, Doug of Ord, Nebraska and Hazel Langer of Gettysburg, South Dakota; a brother-in-law, Don Denny of Ainsworth; along with nieces, nephews and other family members, and friends too numerous to mention. A Memorial Service was held on Saturday, October 26, 2019 at the New Apostolic Church in Ainsworth with Pastor Rick Fuendling officiating at the service. Music was provided by Marlene Sloan with the congregation singing, “Old Rugged Cross,” “Amazing Grace” and “How Great Thou Art.” Inurnment was in the Ainsworth Cemetery. Memorials were suggested to the family in his name and may be sent to Hoch Funeral Home 1320 E. 4th St. Ainsworth, NE 69210. To leave an online condolence, please visit www.hochfuneralhome.com.

The family of Mr. Ernest L. "Ernie" Marvin created this Life Tributes page to make it easy to share your memories.