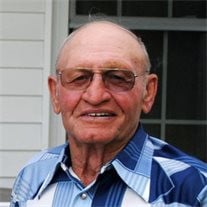 Ernest Elvin "Jim" Moore passed away peacefully at the Brown County Hospital after a short battle with cancer at the age of 76 years, one month and six days. Jim was born to Elvin and Martha (Grubaugh) Moore on May 1, 1938 in the Ainsworth Hospital. He attended rural school until grade eight then went on to attend Ainsworth High School. Jim worked for a number of people in the community, but pursued his love of ranching and farming. On May 28, 1955 he married the love of his life Zelda Yenglin in Long Pine, NE. From this marriage came two daughters Charlotte Ann and Sherry Lynn. Jim ranched for Wayne Clark north of Ainsworth until they were able to ranch and farm on their own. They were joined by son-in-law Rick and daughter Sherry in 1979 on the ranch north of Ainsworth. In 2000 Jim's health concerns played a roll of selling his farming and ranching equipment. Jim and Zelda continued living south of Ainsworth where Jim worked for Madison's Great Western and others until his health declined. He is survived by his wife of 59 years Zelda, daughters Charlotte (Greg) Wales and Sherry (Rick) Buoy all of Ainsworth; four grandchildren; granddaughter Angie (Craig) Neal of Livingston, Montana, grandsons Collin (Teresa) Wales of Osmond, Nebraska and Seth Buoy of O'Neill, Nebraska, granddaughter Hilary Buoy of Sidney, Nebraska; five great-grandsons and two great-granddaughters; Father Elvin Moore of Ainsworth, sister Darlene (John) Reilly of Cleburne, Texas; brother-in-law Maford (Shelia) Yenglin of Cheyenne, Wyoming and sister-in-law Mary (Duane) Keim of Ainsworth; and numerous other family and friends. Jim is preceded in death by his mother Martha, father and mother-in-law Maford and Aileen Yenglin, infant granddaughter Jessica Mae Buoy, and grandson-in-law Ben Wright. Visitations were held on June 12, 2014 at Hoch Funeral Home in Ainsworth. Funeral Services were held on June 13, 2014 at Ainsworth Church of the Nazarene. The service was officiated by Pastor Russell Thayer. Special CD selections were "Heaven In My Woman's Eyes" by Tracy Byrd and "Good Horses To Ride" by Trent Willmon. Special music "Will the Circle Be Unbroken" by Danny Bennett, Pastor Russell Thayer, and Rodney Luther with accompaniment by Kathy Bennett. Pallbearers were Bob Maxwell, Mike Davis, Pat Schumacher, Jon Moody, Mark Vonheeder and Phil Herring. Honorary pallbearers were Ainsworth Elks Lodge #1790 members and all of Jim's other family and friends. Interment was held at the Ainsworth Cemetery, Ainsworth Nebraska. Memorials were directed to the family for a future designation. Hoch Funeral Home of Ainsworth was in charge of the arrangements.

Ernest Elvin "Jim" Moore passed away peacefully at the Brown County Hospital after a short battle with cancer at the age of 76 years, one month and six days. Jim was born to Elvin and Martha (Grubaugh) Moore on May 1, 1938 in the Ainsworth... View Obituary & Service Information

The family of Mr. Ernest E. "Jim" Moore created this Life Tributes page to make it easy to share your memories.

Ernest Elvin &quot;Jim&quot; Moore passed away peacefully at the Brown...