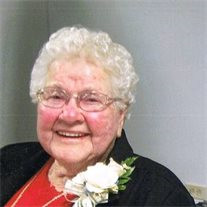 Erma C. Denny, 91, formerly of Long Pine, Nebraska passed away on December 27, 2017, at the Rock County Hospital Long Term Care in Bassett, Nebraska, where she resided for over two years. She was born at Center, Nebraska, on February 6, 1926 to Hans and Theresa (Hoffman) Sass. She was united in marriage to Cecil L. Denny on April 18, 1942, at O'Neill, Nebraska. She had five children and worked at several different jobs to help raise them. For over 55 years she took care of people in their homes. Erma is preceded in death by her parents, her husband, a sister, a daughter, one grandson, and one great-grandson. She is survived by three daughters, Mrs. Tom (Margie) Cosgrove of Long Pine, Judy Frew of Ainsworth, and Mrs. Glen (Cathy) Cole of Long Pine; one son, Gerald Denny and one daughter-in-law, Theresa Denny, of Long Pine, one son-in-law, Gary Kelly of Ainsworth; 13 grandchildren, 24 great-grandchildren, and four great-great-grandchildren; one brother, Henry Sass, of Deming, New Mexico, and a number of nieces and nephews, plus many other relatives and friends. Erma had a big heart, loved by many, touched so many lives, and will be greatly missed. Funeral Services were held at the St. Pius X Catholic Church with Father Louis Nollette serving as Celebrant. Music was provided by DeAnn Morse with selections of "On Eagle's Wings," "How Great Thou Art," "Here I Am Lord," and "Be Not Afraid" being provided. Casket bearers were Eric Denny, Eddie Denny, Johnny Frew, Chad Cosgrove, Shawn Cole, Kevin Cole, Cecil Cole, Michael Kelly and Matt Denny. Honorary bearers were all of Erma's Grandchildren, Great-Grandchildren, and Great-Great-Grandchildren. Burial followed at the Grandview Cemetery in Long Pine, Nebraska. Hoch Funeral Home of Ainsworth was in charge of the arrangements. In lieu of flowers, memorials were suggested to the St. Pius X Catholic Church or to the Rock County Hospital Long Term Care.

Erma C. Denny, 91, formerly of Long Pine, Nebraska passed away on December 27, 2017, at the Rock County Hospital Long Term Care in Bassett, Nebraska, where she resided for over two years. She was born at Center, Nebraska, on February 6, 1926... View Obituary & Service Information

The family of Mrs. Erma Cecelia (Sass) Denny created this Life Tributes page to make it easy to share your memories.