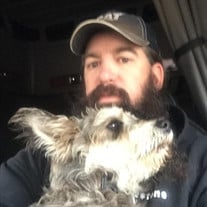 Erich Allen “Hippy” Bussinger was born on December 20, 1974 in Reno, Nevada to Steven A. Bussinger and Connie J. (Bain) Bussinger. In 1976, the family moved back to Bassett, Nebraska where he attended Bassett Grade School and graduated from Rock County High School in 1993. Erich was active in everything the school had to offer. After high school, he wished more than anything to follow in his father’s footsteps and join the military. He was unable to join the military due to medical reasons, so he attended Midland Lutheran in Fremont, Nebraska on a football scholarship. The following year, Erich transferred to Northeast Community College in Norfolk, Nebraska where he graduated with an Associate Degree in Business Management. Erich married Mitriann (Mitz) Lenhard of Stuart, Nebraska in June of 1997. Together they had three boys, Riley, Brendan, and Cameron. His sons were his pride and joy, his most important priorities in life. He was involved in every aspect of their lives, making sure they didn’t want for anything. In 2011, Erich and Mitz got a divorce, but they remained extremely close, always referring to each other as best friends. Aside from his family, his biggest passion in life was truck driving with his copilot, who was known to everyone as “Scooter”, trucked millions of miles in Erich’s shotgun seat. Erich fulfilled his dreams when he bought his own truck to start EB Trucking LLC, his own trucking business, and when he bought his Harley motorcycle. He was active in the Sons of the American Legion, the Bassett American Legion Riders Post #123, and the Knights of Columbus. Erich was an avid NASCAR racing fan and was able to attend a race with his sons two weeks prior to his passing. Because of his father, organ donation was very important to Erich, and he was able to become a donor. Erich was goofy, social, hardworking, patriotic, thoughtful, respectful, and so much more. He could be described as many things, but a stranger was not one of them. Erich was tragically taken from his family and friends on July 15, 2018 due to a motorcycle accident. Erich is preceded in death by his father, Steve, grandparents, Ernie and Marge Bussinger, and grandparents, Bounce and Irene Bain. He is survived by his three sons, Riley, Brendan, and Cameron Bussinger; special friend and soulmate, Kim Clark; mother, Connie; three sisters, Lynette (Herb) Morey of Papillion, Nebraska, Teresa (Vaughn) Beed of West Point, Nebraska, and Susan (Ted Morton) Fleming of Bassett, Nebraska; special nieces and nephews, and an extraordinary vast number of friends. Memorial services were held Friday, July 20, 2018 at 10:30 AM at the Rock County High School Gymnasium in Bassett, Nebraska, officiated by Pastor Dennis Quigley with assistance from Hoch Funeral Home of Bassett. CD selections of “Without You,” and “Home Sweet Home,” by Mötley Crüe were provided. Honorary pallbearers were, all of Erich’s friends from the trucking and biking community. Inurnment followed at the Bassett Memorial Park Cemetery. In lieu of flowers, memorials were suggested to the family for a future designation. A luncheon was held at Bassett American Legion Post #123 following the Inurnment service. Memorials may be directed to the family for further designation.

Erich Allen &#8220;Hippy&#8221; Bussinger was born on December 20, 1974 in Reno, Nevada to Steven A. Bussinger and Connie J. (Bain) Bussinger. In 1976, the family moved back to Bassett, Nebraska where he attended Bassett Grade School and graduated... View Obituary & Service Information

The family of Mr. Erich A. "Hippy" Bussinger created this Life Tributes page to make it easy to share your memories.