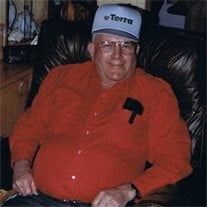 Elwin W. Davis was born on June 11, 1923 to Erwin W. O. and Mary L. (Wanker) Davis at Duff, Nebraska, and passed away on April 25, 2016 at the Golden LivingCenter-Grand Island Lakeview in Grand Island, Nebraska. He grew up on the family farm where his folks were farmers raising livestock and crops. In his younger years, he stayed in Bassett, Nebraska and roomed with people going to high school until his junior year. Elwin entered the United States Army on May 25, 1944 at Camp Roberts, California, later being transferred to Camp Guber in Oklahoma for training, he then served as a Private First Class soldier in the 232nd Field Artillery Battalion. Elwin also served in the 42nd Infantry Rainbow Division as a gun crewman of light artillery, serving in France, Germany and Austria until being honorably discharged at Fort Leavenworth, Kansas on April 22, 1946. After returning home from the service, Elwin worked on area ranches. On January 17, 1946, Elwin W. Davis and LaVonne J. "Bonnie" Kesselhuth were united in marriage in O'Neill, Nebraska. To this union were born a son, Jim Allen and a daughter, Neita Mary. Elwin worked cleaning cattle cars for Bonnie's uncle, Ed Kesselhuth. In later years, he and his son Jim worked with a crew hauling bluegrass seed for Stan Pennington, hauling to Colorado, and various other states. When Jim was little "Jones" and "Bonnie" would live in Terry Town where Elwin was in charge of taking care of potato storage. Elwin worked for Bejot Feedlot for several years discing fields and the planting and hauling of corn. Elwin also served as Fire Chief for several years for the Long Pine Volunteer Firemen and held the office of Commander of the American Legion Post #260. He and his wife Bonnie also owned and operated the Seven Springs Café for 20 years. Elwin enjoyed stock car racing, Nascar, boxing, reading western books and watching old westerns on TV Land. "Jones" was always willing to give a helping hand to anyone who might need it. He will be greatly missed by family and friends. Elwin was preceded in death by his parents; his wife, LaVonne "Bonnie"; his son, Jim; daughter, Neita Mary; two brothers, Sterling and Robin Davis; and a sister, Francis. He is survived by his daughter-in-law, Leolla Davis and special friend Dennis Crowell; and grandson, Shane Davis and his family, Jennifer, Jacob, and Grace Stromberg all of Palmer, Nebraska; a brother-in-law, Dale Davis of Grand Island, his pet cat named "Baby" along with numerous nieces, nephews, and other family members and many, many friends. Funeral services were held at Hoch Funeral Home in Ainsworth, Nebraska with Pastor Al Seadore officiating the service. Special CD selections of "Amazing Grace" by The Statler Brothers, "How Great Thou Art" by Connie Smith, and "Precious Memories" by Tammy Wynette were provided. The obituary was read by Nancy Carley. Pallbearers were, Tim Iverson, Dennis DeWeese, Jason Lehn, Jim DeBolt, Jim Carley, and Johnny Brown. Honorary bearers were Shane Davis, Jennifer Stromberg, Jacob Stromberg, Grace Stromberg, Dennis Crowell and Dale Davis, and all of his other family and friends. Burial with Military Honors were presented by the VFW and The American Legion Members at the Grandview Cemetery in Long Pine, Nebraska. Memorials were suggested to the family in his name.

Elwin W. Davis was born on June 11, 1923 to Erwin W. O. and Mary L. (Wanker) Davis at Duff, Nebraska, and passed away on April 25, 2016 at the Golden LivingCenter-Grand Island Lakeview in Grand Island, Nebraska. He grew up on the family farm... View Obituary & Service Information

The family of Mr. Elwin W. "Jones" Davis created this Life Tributes page to make it easy to share your memories.