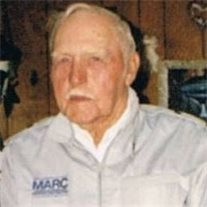 Elvin D. "Al" Moore was born on September 20, 1917 to Delbert and Maude (Higbee) Moore at Meadow Grove, Nebraska, and passed away on August 2, 2015 at the Parkside Manor in Stuart, Nebraska. The family moved to a place just west of Ainsworth, where Al attended school in Brown County, graduating from the eighth grade. He then helped out on the family farm. He met Martha Mae Grubaugh and they were married in Long Pine, Nebraska on November 9, 1936. To this union, two children were born, daughter, Darlene and son, Jim. Martha had passed away on August 14, of 1976. He then married Mattie (Swarm) Munson at Ainsworth, in 1977. Al worked various jobs around Ainsworth, including his last employment with KBR Rural Public Power, where he stayed for 25 years until his retirement in 1982. Al enjoyed hunting, fishing and gathering with friends and family to play music. He especially enjoyed playing the guitar, as well as the banjo and fiddle. In his later years, Al accepted Christ as his Savior and enjoyed being a member of the Ainsworth Assembly of God Church. Al is preceded in death by his parents; five brothers; two sisters; first wife Martha Mae, and second wife, Mattie; son, Jim; along with great-granddaughter-Jessica Buoy, and great-grandson Ben Wright. He leaves to mourn his passing his daughter, Darlene Reilly and husband, John of Cleburne, Texas; daughter-in-law, Zelda Moore of Ainsworth; sisters-in-law, Molly Moore of Ainsworth, and Ellen Moore of Iowa; six grandchildren, numerous great, and great-great-grandchildren; nieces, nephews and other family members including a step-daughter, two step-sons, and step-grandchildren, plus many friends. Graveside services were held on Friday, August 7, 2015 at the Ainsworth Cemetery under the direction of Hoch Funeral Home of Ainsworth. Pastor Gary Graesser officiated the service. Honorary bearers were all of Al's family and friends. In lieu of flowers, memorials were suggested to the family for a future designation.

Elvin D. "Al" Moore was born on September 20, 1917 to Delbert and Maude (Higbee) Moore at Meadow Grove, Nebraska, and passed away on August 2, 2015 at the Parkside Manor in Stuart, Nebraska. The family moved to a place just west of Ainsworth,... View Obituary & Service Information

The family of Mr. Elvin D. "Al" Moore created this Life Tributes page to make it easy to share your memories.