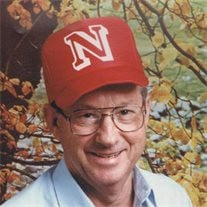 Elmer Ray Sharp, 91 of Long Pine, Nebraska, died on September 7, 2017 at Brown County Hospital in Ainsworth, Nebraska. Elmer and his twin sister, Elnora were the last of five children born on April 29, 1926, to Lewis and Ethel (Firth) Sharp in his family home north of Long Pine. They later moved into town where he received his education. He was a veteran of the United States Marine Corps during World War II. After serving in the Marine Corps he owned a Dry Cleaners business in Long Pine. After selling the dry cleaning business, he became an Insurance Salesman for Travelers Insurance Co. and later worked for Shaffer Oil Co. He married Vivian Jamison and had a daughter, Kristi and a stepson, Tom. Elmer enjoyed dancing, working on cars, lawn mowers, and tinkering on anything mechanical. He also loved putting in a vegetable garden as well as planting flowers. He had some pastureland and raised sheep, pigs, chickens, cows, and also had a couple of horses. After he retired he loved making pies, cakes, and banana bread which he shared with family and friends. Elmer was preceded in death by his parents, his twin sister, Elnora Sharp and his two brothers, Vernon and Clarence. He is survived by one daughter, Kristi Ryan and husband, Rich, of Grand Island, Nebraska, stepson, Tom Seadore and wife, Amy, of Las Vegas, Nevada; four grandchildren Chad, Jessica, Austin, and Sarah, one great grandson, Landon; sister, Lillie Spiker of Thornton, Colorado; along with nieces, nephews, and other family members. Funeral Services were held at Hoch Funeral Home in Ainsworth, with Pastor Gary Graesser officiating the service. Music was provided by Marilyn Williams. Special song selections of "Amazing Grace" and "The Lord's Prayer" were provided by Jason Nelson. A time of sharing was given by daughter, Kristi Ryan and grandson, Chad Wetzel. Pallbearers were, Chad Wetzel, Rich Ryan, Austin Ryan, Ryan Becker, Tom Seadore, Bill King, and Jim King. Honorary bearer was Landon Becker. Burial followed at the Grandview Cemetery in Long Pine with Military Honors being provided by members of the Long Pine VFW Post #5128 and the Bassett American Legion Post #123. In lieu of flowers, memorials have been suggested to the family in his name.

The family of Mr. Elmer R. Sharp created this Life Tributes page to make it easy to share your memories.