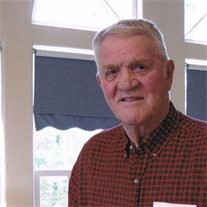 Elmer Woodrow Andersen was born April 19, 1918 and was 99 years old when he passed away August 28, 2017 in the Sandhills Care Center, Ainsworth Nebraska. He was born on a ranch near Elsmere, Nebraska to Jens and Kirsten Andersen, his three siblings were Einar, Donavan, and Edith Keller. The Andersen family moved frequently in Cherry and Brown Counties until settling on what they referred to as the "Poor Farm" east of Johnstown in 1926 where they endured the great depression. Elmer graduated Salutatorian from Johnstown's high school in 1934. He worked various odd jobs as well as for his father after graduation. The family moved to Bassett in 1937. Summer hay crews were some of his most memorable experiences from this time. Elmer enlisted in the Coast Guard in 1941 and spent the World War II years at a weather and navigation station in Greenland in command of a "picket boat." October 1945 he was discharged from the service. Helen Marie Christensen and Elmer were married January 20, 1946 and moved later that year to the Pine Top ranch north of Johnstown on Plum Creek, where they were partners with Jens and started their family. Six children were born while living on this ranch. They were Jerry, Susan, Nancy, Carl, Dale, and Jane. They lived on this ranch until 1958 when they had the opportunity to upgrade from the canyon and rough country ranch to a much more efficient sandhills ranch two miles south of highway 20 on the Moon Lake Road. October 24, 1964, Helen suddenly died of a stroke. September 12, 1966, Elmer married Theona (Leonard) Rasmussen who very bravely moved to Nebraska from West Virginia with her three children Martha, Carol, and John. Elmer was a family man and along with his wives always encouraged his children to explore options and opportunities as they arose. He provided assistance and guidance for them and was always proud of their accomplishments. The family he raised demonstrated a wide variety of accomplishments. An incomplete list includes careers as mechanical engineer, nurse, computer engineer, pastor, technical editor, elder care giver, carpenter and construction, assembly line maintenance, musician, piano tuner, photographer, rancher, farmer, missionary, book keeper, hardware store owner, educator, church worker, ride share driver, office administrator, and military. For several years Elmer was the Lay Leader in the Johnstown Methodist Church and was very involved in leading the adult Sunday School class and holding other offices there. During the construction of the new hospital in Ainsworth he served on the board of directors. He also was active on the Brown County Fair Board. After moving to Ainsworth he was an active participant in the Ainsworth United Methodist Church. Elmer also volunteered for Meals on Wheels as well as at the Care Center. After retiring from ranching Elmer and Theona, "Toni," joined RVICS or "Roving Volunteers in Christ's Service" and started their second career. During the winter they would join other RV owners at a work site in the south and some summers they would travel north. These sites were Christian schools or camps where the RVICS would provide free labor in exchange for RV hook ups. Elmer became project manager for these operations. Elmer and Toni found this activity to be very rewarding and continued until their health limited their ability to travel safely. In his last years of life he spent his time beside Toni and comforted her as her health failed. In the last days of his life he was surrounded by many loving friends, family members, and care center staff. Elmer is predeceased by his wives Helen and Theona, and his brothers, Einar and Donavan. He is survived by his nine children and their families; Jerry Andersen and Anne Chalfant of Walnut Creek, California, Susan and Neil Grindheim of Colorado Springs, Colorado, Nancy and Jim Campbell of Springview, Nebraska, Martha Rasmussen of Ainsworth, Carol and Charlie Noecker of Sierra Madre, California, Carl and Pamela Andersen of Omaha, Nebraska, Dale Andersen of Salida, Colorado, Jane and Mark Lanz of Colorado Springs, and John Rasmussen of Lakewood, Colorado; 18 grandchildren, 35 great- grandchildren and his sister, Edith Keller of Bassett, Nebraska. Memorial Services were held on September 1, 2017 at the United Methodist Church in Ainsworth, with Pastor David Randall officiating the service. Music was provided by Sherry Campbell, and Lisa Wiebesiek, with special song selections of "In This Very Room," "Finally Home," and "Until Then". Also provided was a flute instrumental of "He Hideth My Soul" by John Rasmussen as the family was being seated. The CD selection of "Sometimes I Wonder" by Ernie Haase & Signature Sound was also provided, along with the congregational selections of "How Great Thou Art" and the Doxology. Inurnment followed at the Ainsworth Cemetery with Military Honors being provided by the Ainsworth American Legion Post #79. Hoch Funeral Home of Ainsworth was in charge of the arrangements. Memorials were suggested to the Sandhills Care Center.

Elmer Woodrow Andersen was born April 19, 1918 and was 99 years old when he passed away August 28, 2017 in the Sandhills Care Center, Ainsworth Nebraska. He was born on a ranch near Elsmere, Nebraska to Jens and Kirsten Andersen, his three siblings... View Obituary & Service Information

The family of Mr. Elmer W. Andersen created this Life Tributes page to make it easy to share your memories.