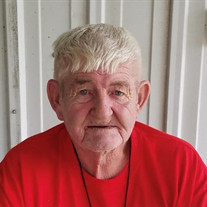 OBITUARY FOR ELLIS “AL” HODGE Ellis E. 'Al' Hodge was born December 15, 1939, to Ada Mae (Williamson) and Clyde Thomas Hodge. He passed away March 16, 2020 at the age of 80. Al lived in Arkansas a year before moving to Genesee County, Michigan. There, his birth certificate was finally applied for. He was raised in Grand Blanc and Burton, Michigan. The second of Ada and Clyde's three children, Al had an older sister Jody and younger brother Thomas. When he was nine years old, his mother, Ada Mae, married Glenn Edwin Smith, who had three daughters- Norma, Marilyn, and Glendall- and a son, Dale. To this union, two more children, Pam and Ron Smith, were born. Al attended Grand Blanc School, and participated in Golden Gloves boxing in high school, of which he was very proud. At the age of 15, he left home and traveled extensively throughout the country doing freelance work. He worked in almost every state in the US, and loved telling stories of some of his more exciting experiences. Some of these stories included working at General Motors, being a bodyguard for a wealthy man, helping on the Alaskan Pipeline, being in a Crest Toothpaste TV commercial in Los Angeles, doing steelwork on skyscrapers in New York, playing a short role as a hanged man in a Western movie, and working as a hired man on several dude ranches and also at a few large ranches in Colorado and Wyoming, as well as much more. Al met Cheryl Louise Poore in Cheyenne, Wyoming, while bull riding at a rodeo. He had 3 broken ribs, but still danced with her all night, even though she kept squeezing his sides. He married her September 27, 1973, and had a son named Glen in 1975. In '76, they moved to Cheryl's family ranch in southern Brown County, NE, to help her parents. They had a daughter, Malinda, in '83, and another son, Eugene, in '86. He continued to thoroughly enjoy ranching in the Sandhills for 45 years. Al was also very active in his community. He was a founding member of the Brown County Calamus Fire Department, and also his pride and joy, the Ainsworth Horseshoe Club. He worked very diligently to bring several state tournaments to Ainsworth, as well as the World Horseshoe Tournament not once, but twice, in '86 and '98, a feat which then had been unheard of. Throughout his life he was an avid bow and rifle hunter, trapper, and fisherman. He enjoyed bear hunting in his younger years in Canada with family and friends numerous times. Some of his favorite memories were made in over 45 years of deer hunting. He enjoyed taking his kids, neighbor kids, grandkids, and friends chasing trophy deer through the Sandhills. He didn't always come back with the 'big bucks,' but he always had fun sharing his knowledge. Al was especially involved in his local community, despite living 30 miles away in the country. He cherished his years as a 4-H shooting instructor. Al was also a proud supporter of all the local bake sales, and was always the first to volunteer to chaperone his childrens' country school trips. He was also very proud of his Louis L'Amour book collection, always the first at any rummage sale or auction advertising them. He will be fondly remembered and missed by all. Al is preceded in death by stepfather Glenn Smith, brother Thomas, father Clyde, stepbrother Dale, father-in-law Lawrence Poore, son Glen, mother Ada Mae, wife Cheryl, sister Jody, and mother-in-law Bessie Poore. Al is survived by his daughter Malinda Hodge, significant other Tim Roggasch, and granddaughters Brandie Messersmith and Savanah McGowan of Rose, NE. Son Eugene Hodge and Jennifer (Buesing), and grandchildren Torrance, Lura, and Robert Hodge of Johnstown, NE. Sister Pam Smith of Davison, MI, brother Ron Smith and wife Carla of Byron, MI, brother-in-law Doc McMahan of Chester, SC, sister-in-law Karen Sullivan of FL, and all his nieces, nephews, and friends. A Private Graveside Service was held on Saturday, March 21, 2020 at the Ainsworth Cemetery with Pastor Bruce Beebout officiating at the service. Music selections of the Amazing Grace, The Long Black Train and Killin' Time were played. Casketbearers were: Eugene Hodge, Tim Roggasch, Robert Hodge, Cody Buesing, Dave Buesing, Chris Buesing and Travis Schmitz. Honorary Casketbearer was Ken Smith. In lieu of flowers, memorials have been suggested to the family in Al's name for a future designation. ********It is also to be noted that a memorial service will be held at a later date for the public. Hoch Funeral Home of Ainsworth was in charge of the arrangements.****

The family of Ellis E. "Al" Hodge created this Life Tributes page to make it easy to share your memories.