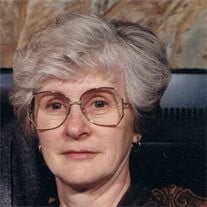 Ella Rose (Hansen) Shaw September 26, 1941 – September 21, 2014 Ella Rose Shaw was called home to the Lord on September 21, 2014 at University Hospital in Omaha, Nebraska following a lengthy battle with several types of cancer. She was born in Boscobel, Wisconsin, the third child of Leonard and Geneva (Smith) Hansen and moved to South Dakota when she was four. She grew up in and around the Iona, South Dakota area. When she was 15, she met her future husband, Jim Shaw, through her older brother, Kenny. Jim and Ella were married in Gregory, South Dakota, on November 9, 1957. Their first son, Martin James, was born prematurely and died November 16, 1958. In 1959 they moved to Bassett, Nebraska where they lived and raised their family. Ella was a wife, mother, and homemaker who always put her family first. She was an avid seamstress and after the kids were all in school, she worked with Jim at Bassett Body & Glass, reupholstering automobile seats. In later employments, she worked at the Bassett Nursing Home in the housekeeping department and the Rock County Hospital in the laundry department. Her pride and joy were her grandchildren and her flower gardens. Ella is preceded in death by her infant son, Martin James Shaw; parents, Leonard & Geneva Hansen; brother, Kenneth Hansen. She is survived by her husband, Jim; children, Darla (Charlie) Novotny of Omaha, Nebraska; JT (Kim) Shaw of Bassett; Kirt Shaw of Idaho Falls, Idaho; and Annita Wilson of Loveland, Ohio; 9 grandchildren, 3 step-grandchildren; 1 great-granddaughter, 6 step-grandchildren; sisters, Gladys Holley of Corpus Christi, Texas; Luan Klemann of Witten, South Dakota; Joan Brown of Bassett and sister-in-law, Nola Hansen of Bassett, along with nieces and nephews. Funeral services were held on September 25, 2014 at the St. Peter Lutheran Church in Bassett with Pastor Melody Brink officiating over the service. Music was provided by Evelyn Armstrong. Congregational Selections were, "Rock of Ages", "Old Rugged Cross" and "Amazing Grace." Pallbearers were, Rick Carr, Jim Anderson, Rod Stolcpart, Steve Hansen, Brad Arrowsmith, and Rick Mayfield. Honorary bearers were all of Ella's many friends. Burial was held at the Olive Branch Cemetery near Mills, Nebraska. Memorials were directed to the Rock County Hospital or to the St. Peter Lutheran Church of Bassett. Hoch Funeral Home of Bassett was in charge of the arrangements.

The family of Mrs. Ella R. (Hansen) Shaw created this Life Tributes page to make it easy to share your memories.