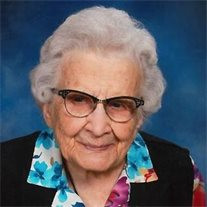 Elizabeth "Betty" Martin Lucas Overturf Osborn passed peacefully from this life on May 6, 2014 at the Brown County Hospital. Betty's birthplace was Gandy, in Logan County, Nebraska on April 15, 1913 and was the oldest child of Thomas Martin Lucas and Emma Elizabeth (Wetterer) Lucas. She had five siblings: William Charles a stillborn twin; Ruth Jean; Mary Lou; Thomas, and Robert Charles Lucas. Betty's 101-year life span was filled with a wide range of experiences and frequent traumas and challenges, which she met with her strong perseverance. Her parents were married in August of 1912 and moved to a homestead on the Dismal River in Thomas County Nebraska. Here Betty's first home was indeed a sod house. A few years later the family moved to a farmstead, 3 miles east of Thedford, Nebraska, which was divided by the Middle Loup River. She started her education in Thedford by riding Old Buck to school on the good weather days and a wagon, which had to ford the river, when poor weather conditions existed. The family did not establish firm locations and moved several times, which had Betty attending schools in Thedford, NE., Taylor, NE., Wayne, NE., Missouri Valley, IA and finally the ultimate home in Central City, Nebraska. In 1930 Betty graduated High School in Central City and then graduated in 1932 from the faith-based Nebraska Central College. In August of 1932 she went to teach in Southwest Brown County at Koshopah. This school had 10 grades and she taught part grade school and part high school. She married Earle Eugene Overturf on Christmas Eve of 1932 and continued to hold her job until the spring of 1934 when they returned to Central City. Patricia Louise Overturf was born at her parent's home on May 2, 1934. Ruth Joan Overturf was born in Octavia, Nebraska on November 22, 1936. In February of 1938 both of her parents were killed in a car/train accident leaving Tom and Bobby as orphans. Betty took charge of her brothers and brought them with her as they moved to Ainsworth to carry mail to Elsmere NE. Later that year Bobby was entered into kindergarten and Tom to High School. Betty found employment at the local dry cleaners after she and Earle Overturf divorced in 1943. Due to the shortage of Postal employees she was hired as a temporary employee until the end of the war period in 1947. It was at this location that she met a co-worker Gerald Ervin Osborn. She moved to employment with the Commercial National Bank on the 22nd of September 1947 and continued the job until December 31, 1976. She started as a bookkeeper, and ultimately was elected an officer of the firm. Gerald and Betty were married on December 27, 1955, which was very compatible union that lasted until Gerald's death in September 1991. The later chapters of Betty's life were more organized than her earlier experiences of mobility and challenges. She moved into a house at 227 East 5th Street and lived there 60 years. She and Gerald did various volunteer tasks and were always helping a neighbor, friend or family out. In her retirement Betty and Gerald traveled from East Coast to West Coast, visiting various family units and sharing the good times. She was an avid quilter and made a baby blanket for each one her great-grandchildren. These were in addition to those that were made for 'special' events. She shared Gerald's zest for the outdoors experience and often went along on the fishing adventures and hated to put the worm on the hook. For the hunters who came she would get up early and have a hearty breakfast to send the hunting party on their way. Betty was preceded in death by her husband Gerald; her parents; brother William; sisters Ruth Jean and Mary Lou, daughter Patricia and her husband Robert Williams; and stepson Dale Osborn. Survivors include daughter Ruth Joan Wills; brothers Thomas and Robert Lucas, Stepson G. W. Gerry Osborn (Bev); Stepson Kenneth Osborn (Anne); Step-daughter-in-law Elaine Osborn; and Stepdaughter-in-law Susan Osborn; 17 grandchildren; 36 great-grandchildren and 6 great-great grandchildren. Memorial services were held on June 9, 2014 at the United Methodist Church in Ainsworth, Nebraska with Pastor Eldon Davis officiating the service. Music was provided by Marilyn Williams and Todd Mundhenke with song selections of "The Old Rugged Cross" and "How Great Thou Art." Honorary bearers were all of Betty's Caregivers. Memorials were directed to the Ainsworth United Methodist Church. Hoch Funeral Home of Ainsworth was in charge of the arrangements.

Elizabeth "Betty" Martin Lucas Overturf Osborn passed peacefully from this life on May 6, 2014 at the Brown County Hospital. Betty's birthplace was Gandy, in Logan County, Nebraska on April 15, 1913 and was the oldest child of Thomas Martin... View Obituary & Service Information

The family of Mrs. Elizabeth M. (Lucas) "Betty" Osborn created this Life Tributes page to make it easy to share your memories.