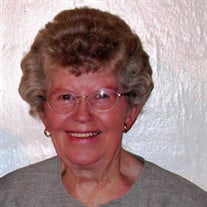 “Betty” Elizabeth Louise Priest, age 87, of Ainsworth, Nebraska passed away on Tuesday, February 12, 2019 at the Brown County Hospital. Betty was born on April 3, 1931 at the family farm eight miles southwest of Wisner, Nebraska, to Harvey and Anna Veronica (Osman) Breitkreutz, one of eleven children born to this union. She attended District #70 rural school through the eighth grade. Betty then stayed home to help her parents with work on the farm and her younger siblings. She milked cows, picked corn, and stacked hay with her siblings. She had fond memories of playing baseball with her siblings when all their chores were done. Later Betty attended the Norfolk Beauty School and graduated at the top of her class. After cosmetology school, she worked for a while in Pender, Nebraska and eventually ended up in Valentine, Nebraska where she worked in a beauty shop in the basement of a cafe, where she met Jerry Priest. On Dec 31, 1955, she married Gerald “Jerry" Priest in Pierre, South Dakota. After they were married, they lived in several states where Jerry built power lines and Betty continued to do hair. Five children were born to this union; Sharon, Jeri Lea, Larry, David and Mark. Jerry and Betty bought their farm southwest of Ainsworth in 1971. Betty worked on the farm milking cows, gardening, canning, raising chickens and caring for their children, (the kids said you could often hear her yodeling while milking the cows.) Family was most important to Betty as she enjoyed being with her children, grandchildren, and great-grandchildren, playing cards, laughing, and sharing stories. Betty was a wonderful cook and loved to spoil her grandkids with homemade noodles, pies, and her Ribbon Jello dessert. Betty is preceded in death by her parents; son, Larry Eugene Priest; brothers Al, Roland, and LeRoy; sisters, Violet Thompson and Ramona “Ethel” Colsden. Betty is survived by her husband, Gerald Priest of Ainsworth; her daughters, Sharon (Harlan) Simonson of Ainsworth, and Jeri Lea (Gordy) Huddle of Thedford, Nebraska; her sons, David (Julie) Priest of Long Pine, Nebraska and Mark (Sandy) Priest of Merna, Nebraska; her grandchildren, Jesse (Megan) Huddle, Darin (Layne) Priest, Daniel (Laura) Priest, Ryan and Chad Simonson, Adyson and Caenyn Priest; and her great-grandchildren Alyvia and Wrenley Priest, MaKenna and Draiden Priest; brother, Duane Breitkreutz (Florence) of Fremont, Nebraska; sisters, Reta (Larry) Clark of Stanton, Nebraska, Sharon Lehman, of Charlotte, North Carolina, and Evelyn (Richard) Smith of Valentine; and many nieces and nephews. Funeral Services were held on February 18, 2019 at Hoch Funeral Home in Ainsworth, Nebraska. Father Phil Flott served as Celebrant. CD selections of “How Great Thou Art” by Alan Jackson, “Go Rest High on That Mountain” by Vince Gill and “I Can Only Imagine,” by Mercy Me, were provided. Special remarks were given by grandson, Caenyn Priest. Pallbearers were, Darin Priest, Ryan Simonson, Caenyn Priest, Daniel Priest, Jesse Huddle, and Chad Simonson. Honorary bearers were, Adyson Priest, Alyvia Priest, MaKenna Priest, Wrenley Priest, and Draiden Priest. Interment followed in the Ainsworth Cemetery. In lieu of flowers, memorials are suggested to the Brown County Ambulance Association, the Brown County Hospital, or to the family in her name.

The family of Mrs. Elizabeth L. "Betty" (Breitkreutz) Priest created this Life Tributes page to make it easy to share your memories.