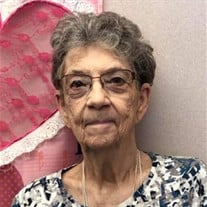 Eleanor Ruth (Davis) Roggasch was born on March 7, 1936 at Sumpter, Oregon, to Alfred and Dorothy (Lynn) Davis. She passed away on January 11, 2022 at the age of 85 years, 10 Months, and 4 days in Omaha, Nebraska. At the age of three years, she moved with her family from Oregon to Nebraska. She attended one year of grade school at a country school in southern Rock County, graduated from the eighth grade in Bassett, and graduated from Rock County High School on May 15, 1953. The day following graduation she moved to Lincoln, Nebraska where she worked as a secretary for six years. She was baptized and became a member of the United Methodist Church at Bassett, Nebraska on April 6, 1947. On June 3, 1959, she was united in marriage to Dennis Duane Roggasch of Rose, Nebraska. On April 3, 1962, son Randy Arthur was born. Their second son Ronny Donald was born on October 27, 1967. In 1978, when Randy entered high school they built a home on the outskirts of Bassett. The time they spent together as a family at the ranch was always very special. She was blessed with 46 years of marriage to the love of her life, husband Dennis and had a very deep love for her two sons and was proud of their accomplishments. Eleanor had a special love for the elderly people and people with special needs. She was active in many organizations which allowed her to be a strong advocate for these people. She testified at the Nebraska State Legislature as an advocate for disabled persons and helped draft a state law which has been beneficial to many special education students through the public school system. Her love for children of all ages was evident by the relationships she enjoyed with all her nieces and nephews, neighbor children and other special friends. She was lovingly called “Auntie”, “Grandma”, and “R” by some of these children. She was presented the Nebraska “Good Neighbor Award” in 1996 from the Knights of Ak-Sar-Ben and Omaha World Herald in recognition of her good deeds in the community. She started back to work full-time at the age that most people retire, and she enjoyed working as a medical clinic receptionist for ten and one half years. During that time she touched many lives and endeared herself to the patients, who always became her friends. Dennis passed away in 2005, and when she retired from her job in May 2010, she moved to Omaha to be close to their sons. She enjoyed living in a retirement village and made many new friends. She kept active with volunteer work. Preceding her in death were her parents, Alfred and Dorothy Davis; husband, Dennis; three sisters, Laurine Rigney, Wilma Hungerford and Delores Stec; and one brother, Richard Davis. She leaves to mourn, her sons, Randy and Ronny of Omaha; brother-in-law, Don (Mary) Roggasch of Rose, Nebraska; sister-in-law, Regina Brockley of Valentine, Nebraska; along with numerous nieces, nephews and other family members. Funeral Services were held on Monday, January 17, 2022 at the United Methodist Church in Bassett, Nebraska with Pastor Jeanie Leeper officiating at the service. Music was provided by JoAnn Swanson. The Congregational Hymn of, “What A Friend We Have in Jesus” and the CD Selections of “How Great Thou Art” by Elvis Presley and “I Cross My Heart” by George Strait were played. Interment followed at the Grandview Cemetery in Long Pine, Nebraska. Casket Bearers were: Tim Roggasch, Ryan Roggasch, Mike Davis, Scott Stec, Bryan Stec and John Robertson. Honorary Casket Bearers were: Jeremy Roggasch, Mike Brockley, Brad Brockley, Bruce Spilker and Larry Ebert II. Memorials were suggested to the family in Eleanor’s name for future designation. Hoch Funeral Home of Bassett was entrusted with the service arrangements. Online Condolences may be left for the family at www.hochfuneralhome.com.

The family of Eleanor R. (Davis) Roggasch created this Life Tributes page to make it easy to share your memories.