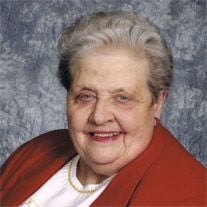 Eleanor Elaine Morrow, 82, of Kearney, Nebraska and formerly of Mesa, Arizona and Auburn, Washington, passed away on April 9, 2013 at Good Samaritan Hospital in Kearney. Eleanor, daughter of Clarence D. Morrow and Velleta (Baker) Morrow was born July 12, 1930 in Ainsworth, Nebraska. She started elementary school at District #43 and then attended the Ainsworth Public Schools, graduating in 1948. Following graduation she went to work for Northwestern Bell Telephone Company. In 1952 she moved to Grand Island, Nebraska to work as a telephone operator for Northwestern Bell and then at the Ordinance Plant. She then moved to Omaha, Nebraska where from 1958 -1962 she was employed as a PBX Switchboard Operator first at the Standard Blue Print Company and then at the Chevrolet Motor Division District Office. Following a trip to the west coast she decided she liked the weather there, and moved to Port Orchard, Washington, working both as a telephone switchboard operator and on the assembly line making rockets at the Boeing Company. Continuing as a switchboard operator, she was hired into a Civil Service Job in 1963 at Ft. Lawton, Washington and also spent time at the Bangor Naval Depot serving as a navy secretary. Finding herself homesick, she returned for a short six month stint at the switchboard at Offutt Air Force Base, but upon experiencing another Nebraska winter returned to Port Orchard, working at the Bremerton Ship Yard. Eleanor transferred to the General Services Administration in Auburn, Washington in 1967 and worked switchboards in Fort Lewis, Washington, and in Seattle, Washington at the downtown Federal Building, retiring in 1990 as the Communications Supervisor at the Veterans Administration in Seattle. Eleanor was always a sports enthusiast and in her early years played on various Nebraska softballs teams in Ainsworth, Grand Island and Omaha. As a loyal fan of the Nebraska Cornhuskers, Washington Huskies, Seattle Seahawks, Seattle Mariners, Phoenix Suns and the Arizona Diamondbacks, she took several trips around the United States to attend some of their games. She loved watching sports on television, and had a great understanding of the games. During her short return to work in Nebraska, Eleanor began playing pool and enjoyed the game for many years, having a trophy or two to prove it! Most days Eleanor could be seen wearing several pieces of "blingy" jewelry from rings to watches to necklaces. She never took life too seriously and enjoyed the fun and pleasures that it offered! She loved to laugh and always enjoyed a good meal and a good hand of poker along with many other games! Her early retirement years were spent on Lake Holm, in Auburn, Washington, where she resided for 35 years with her dear friend, Bette Roberts. In 1999 they started spending their winters in Apache Junction, Arizona. She enjoyed life in the park there, where she was involved in many activities and had many friends. In 2002, Eleanor moved to Arizona permanently, and in 2006 she moved to Discovery Point, a retirement community in Mesa. Aware of her failing health and in order to be closer to family, January 2013 found Eleanor moving back to her home state of Nebraska and until her death residing at an assisted living facility in Kearney. Preceding her in death were her parents, Clarence and Velleta and brother, Eldon Morrow. Those left to treasure her memory include sister-in-law Leona Morrow of Ainsworth; nieces, Sherry Morrow of Kearney, and Joyce Richardson and husband Kevin of Broken Bow, Nebraska and a great niece Mishayla Richardson of Omaha, Nebraska along with several cousins and a host of friends. A celebration of Eleanor's life was held on Saturday, April 13, 2013 at the United Methodist Church in Ainsworth, Nebraska with the Revs. Eldon Davis and Dean Pofahl officiating. Music was provided by Sherry Campbell and Lisa Wiebesiek. Casket bearers were Glen Baker, Keith Baker, Roger McCoy, Bill Morrow, Jim Morrow, Kevin Richardson, Deb Wetzel and Eldon Haas. Interment was held in the Ainsworth Cemetery under the direction of Hoch Funeral Home of Ainsworth. Memorials have been suggested to the Ainsworth United Methodist Church, Brown County Historical Society or to the donor's choice.

The family of Eleanor Elaine Morrow created this Life Tributes page to make it easy to share your memories.