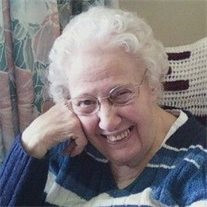 Eleanor Carpenter; 7-8-1925 to 8-7-2013, 88 years and one month. Eleanor Ruby Engleman Carpenter was born at home in Grand Island, NE on July 8, 1925 to David LeRoy and Ora Marie Newtson Engleman. She died peacefully at her residence in the Rock County Long Term Care in Bassett, Nebraska on August 7, 2013. When Eleanor was a very young child, the Engleman family moved to Overton, Nebraska. She spent the next ten years near Overton. In 1936, the family moved to Rock County where Eleanor completed her education and graduated from Rock County High School in 1943. Having completed the normal school training program, Eleanor began teaching at the age of 18 in her first one-room country schoolhouse located approximately one mile from her parent's home. She often rode a horse to school. Eleanor continued to teach for the next seven years, where she encountered everything from chopping wood, carrying in coal and water, trapping and killing skunks under the school house, to having her sister-in-law live with her so that Eleanor could help her catch up in school after an extended illness. On August 2, 1946, Eleanor married Harry O'dell Carpenter in a private family ceremony at her parent's home. Four children were eventually born to this union. Following marriage, Harry and Eleanor moved south of Newport where Harry worked for Clayton Bogue, and Eleanor taught at the Eureka Valley School. In 1950, they moved to Wheeler County near Bartlett, Nebraska with Harry's parents. In 1952 they moved south of Long Pine onto the Frank Jilg place. Within a short time, and with an infant son in tow, Harry and Eleanor moved northeast of Bassett onto a section of land owned by Eleanor's parents in order to help them with the work of a dairy farm. They continued to dairy for their entire married life. They ultimately purchased this place in 1958. Allan Eugene was born in August of 1952, followed by Roberta Elene in June of 1954. LeRoy O'dell joined the family in September 1957 and finally Gaylene Reneé in April of 1961. Harry and Eleanor enjoyed almost 39 years of marriage before Harry passed away in May of 1985. Eleanor then moved into Bassett in 1986 where she became an active member of the community through the Senior Center and teaching the after school Good News Club in her home. She also often opened her home to those in need, whether they were grandchildren or nephews needing a place to eat lunch during school, or children from her Good News Club who just needed a place to stay occasionally. Eleanor willingly helped out by staying with and taking care of elderly long-time friends and neighbors. Two of her favorite activities of service were teaching Sunday school and conducting Bible Study at the Rock County Long-Term Care. Eleanor was a charter member of the church that would ultimately become Emmanuel Community Church. Serving the Lord was truly Eleanor's passion. She did it quietly and with little fanfare. She epitomized the true Christian ideal. She was preceded in death by her parents (David and Ora Engleman), parents-in-law (Alvah and Ruby Carpenter), husband (Harry Carpenter), five brothers (Leland, Jim, Dale, Melvin, and Harold Engleman), two brothers-in-law (Asa Carpenter and Finch Clarke), and six sisters-in-law. She is survived by her four children, Allan and wife Ellen of Bassett; Roberta and husband Larry Spann of Gregory, South Dakota; LeRoy and wife Jackie of Bassett; and Gaylene and husband John Simones of Caldwell, Idaho. Nine grandchildren and nine great-grandchildren, Kipton James Spann and Quincy LeRoy Spann from Parkston, South Dakota; Jeff Carpenter and wife Erin and five children (Christopher, Laura, Daniel, Matthew, and Megan) from Bassett. Stephanie Tofighi and husband, Davood and son (Kayvan) from Atlanta, Georgia; Cody Spann and wife Pam and three daughters (Christina, Sarah, and Rebecca) from Bonesteel, South Dakota; Shannon Simones from Newport, Rhode Island; Samantha Simones from Pocatello, Idaho; Clayton Carpenter from Wallace, Nebraksa; and Roger Carpenter from Bassett. Two sisters—Renelda Clarke from Riverside, California and Harriet Foster and husband Bob from Bloomfield, New Mexico. Three sisters-in-law, Reneé Carpenter from Logan, New Mexico; Lorraine Carpenter from Amelia, Nebraska; and Marjorie Engleman from Cody, Wyoming. Brother-in-law, Floyd Carpenter from Logan, New Mexico and numerous nieces, nephews, grand-nieces and nephews, and cousins. Funeral services were held on August 10, 2013 at 10:30 AM at the Emmanuel Community Church in Bassett, Nebraska. Pastor Dennis Quigley officiated over the service. Music was provided by Ellen Carpenter, with "How Great Thou Art" being provided by Stanley Larson, "Beyond the Sunset" by Allan and Jeffrey Carpenter, and "He Looked Beyond My Faults" by Gaylene Simones and Allan Carpenter. Personal reflections was given by Allan Carpenter. Pallbearers were, Kip Spann, Quincy Spann, Jeffrey Carpenter, Cody Spann, Clayton Carpenter, Roger Carpenter, Eric Martin and Davood Tofighi and Paul Carpenter. Burial was held at the Bassett Memorial Park Cemetery. Jeffery Carpenter, played "Amazing Grace" on his trumpet and then led the song at the cemetery. Hoch Funeral Home was in charge of the arrangements. (Music was such a vital part of Eleanors life, and because of that, a praise music fest followed the dinner back at the church.) Memorials were directed to the Emmanuel Community Church Missions Fund.

Eleanor Carpenter; 7-8-1925 to 8-7-2013, 88 years and one month. Eleanor Ruby Engleman Carpenter was born at home in Grand Island, NE on July 8, 1925 to David LeRoy and Ora Marie Newtson Engleman. She died peacefully at her residence in the... View Obituary & Service Information

The family of Mrs. Eleanor R. (Engleman) Carpenter created this Life Tributes page to make it easy to share your memories.